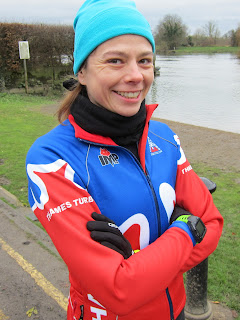 Lapchallenge brought me another unexpected race late in the year - run by a fellow Thames Turbo club member - a lovely 10km loop around Twickenham.  Mostly along the river and with a couple of obstacles; some steps, a couple of bridges with bike barriers at each end and a kissing gate that really slowed the flow of runners for a while (I just hopped over the railings).  The start and finish are at the White Swan pretty much on the river banks and there are loos right there, which is handy, and the pub were laying on a barbecue for after the race; even nicer!

Having run the Thames Turbo half marathon a couple of weekends ago, and run it pretty hard only to have a relatively slow time as a result, I wasn't particularly positive going in to this 10K race.  I've not been having the quickest 5km runs either and the level of effort I've had to put in to get a time that's more than 2 minutes slower than my 5K PB is just demoralising.

Sunday morning of the race and I still wasn't feeling all that confident in my speed, having been putting in silly slow 5K times with large effort for the last couple of months.  We got up and had bacon and scrambled eggs with coffee and cream for breakfast then ambled into Twickenham to park and walk down to registration/start/finish at the White Swan by the river.  It was pretty quiet and a good time to arrive for Mr TOTKat to be shown his marshalling spot and get a lovely hi-vis tabard to wear.  A great big red inflatable start/finish hoop clearly marked where things were at, which was nice.  What was a pleasant surprise was the 463 registered runners - about double what I was expecting.

I was ready for a slippery mudfest for some of the course, having been warned of that, and had on my £24 New Balance MT101

s which are fabulously light, grippy and surprisingly good on concrete too.  And we were off on the dot of 10am.  After a few seconds I made it through the start hoop; I'd started a bit down the field with my pessimistic 1 hour or more predicted time.  And we trotted down through a park, past Mr TOTKat's turn point *wave* and the tide of runners went out.  I let it.  Early on in a race, many people go out too hard, don't pace well and you'll reel them in again later.  Kitted out in my new club strip, I got a "GO TURBO!" from a couple of ladies by the path; which was nice :o)

Having felt pretty perky in the morning, I also didn't really experience the usual "Oh, I could stop now. There's no reason to push so hard, is there?" feelings in an appreciable way.  As Noakes says, they usually kick in about 2/3rds the way into a race regardless of length, but today they didn't.  I did, however, get a nasty stitch at about 32 minutes in and had to slow and walk through it for a minute before it was gone sufficiently to pick up to run again.  In that minute about 8-10 people passed me (one helpfully checking I was OK "yep, just a stitch thanks!"), and I thought how annoyed I would be if I were them passing someone walking only to be overtaken by that person in a couple of minutes.  Sorry!  I had a bad stitch, I'm not one of those annoying people who run/walk shorter distances in races*.

So I overtook most of them again, maybe even all I didn't really notice.  Having noticed 6km bleep on my Garmin, I was waiting for the 7km marker but it never came and the course headed into the town centre for a bit so there wasn't a convenient spot for the markers any more.

The 8km marker turned up way before expected (and my Garmin said it was at 7.34km).  There were a fair few people without GPS watches who thought they were flying when they saw that; oops!  I was pretty pleased that my pacing had been wonderfully even through the run to that point and thought I'd try a little extra speed soonish to get that last km knocked out faster.

And, lookit!  With a nicely evenly paced preceding 9km (apart from 7th km where I had to walk out the stitch), I threw in a final km that was 20s+ quicker.  Very nice!  But my happiness turned to huge disappointment as I approached the finish hoop (feeling like now was a good time to be able to stop running so hard) and I saw the timer saying 1:05:xx (or so I thought).  How could I have put in a 65 minute 10km!?  Not fair at all, seeing how well I'd paced!  And then I looked down at my heart rate monitor to stop it and saw it saying 00:54:xx and I looked up at the timer again to realise it was showing the time and was awfully formatted - it was, in fact, 10:54:xx 6 minutes to 11am :o)  Muuuuch better!

All in all a lovely race and I'm pleased with how it went.  Nice, even pacing, worked through the stitch, ran straight through the mud and puddles (rather than mincing around the sides of them), shoes were perfectly grippy on all of the surfaces, and I put in a cracking effort at the end.  Job done.

More pace/speed improvements to come as I work on stuff over the coming few months and I've got every confidence in putting in a sub 50 minute 10km at some point in the not too distant future.

* - If run/walk is your strategy for distances less than a (standalone) marathon, I mean you.  Yes, you.  You're ANNOYING!  If you can't run the whole distance, don't race; or... man up in the race and force yourself.  Train more/better and finish a race in an honourable way!  (Any courses with appreciably evil hills are exempt from this - walk all you need to!)
Posted by TOTKat at 14:31