It really is that simple

It's been 5 weeks since I wrote this post about being more coated in fat that I was happy with and despite the fact that it showed I was a bit miserable about my body image at the time, I'm glad I wrote it.  It prompted a helpful, knowledgeable, medically trained pro triathlete to point me at a book by Gary Taubes - "Why We Get Fat and what to do about it".

I devoured the book, my brain being challenged in the first couple of chapters as Taubes grinds against all that we've been taught all of our lives about food and nutrition.  He writes convincingly, refers to reams of studies and papers and honestly admits there are holes in the understanding so  I decided immediately that I wanted to try out the theory of what he was describing and then read a load more books and articles. 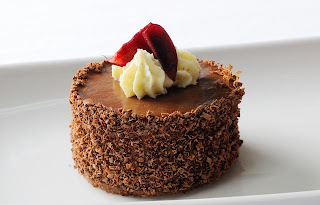 The basic premise is that (in most people except those with type 1 diabetes and a few other metabolic nasties) carbohydrates, and increasingly the more refined and further from foods that pretty much cave men would have had access to, provoke insulin responses that result in the laying down of fat in the body.  It's worse for some than others, some people seem to be carbohydrate tolerant all their lives and some deteriorate over time and exposure to high levels of carbohydrate. For many who are not carbohydrate tolerant, the fix is to significantly reduce carbohydrate intake, and pretty much eliminate the most refined types; sugar, white flour and other processed grains.  The trap that many fall into when reducing carbohydrate intake is that they try to eat low fat foods too and Taubes (and Phinney and Volek, and Noakes and others) explain that fat isn't as evil as we've been led to believe, and eating fat neither makes you fat, nor increases the "bad" cholesterol (small particle size LDL) and in fact eating high proportions of fat can increase the "good" cholesterol (HDL) and possibly change the type of LDL cholesterol from smaller to larger (medium and large LDL particles seem to be associated with no elevated risk of heart disease) circulating in the blood.  It can also assist in correcting excess body fat.  Additionally, the reason humans need lots of fruit and vegetables to get hold of vitamins and minerals is because the high carbohydrate in the diet creates the extra requirement for higher amounts of them all in the diet to be able to metabolise and use them.  If you reduce the carbohydrate dramatically, you can get almost all of the nutrients you need from animal products (meat and fat) apart from vitamin C which is special. (It is possible, if difficult, to achieve the same effect with a vegetarian diet.)

So, for 5 weeks now, I've been eating a low carbohydrate, high fat diet.  And the biggest, easiest change to notice is that I don't get hungry.  Someone asked the other day "what do you eat for bulk in your meals, so you feel full?".  If you're eating low carbohydrate, hunger and "fullness" don't work or feel the same as they do on a "normal", Western, high carbohydrate diet.  When I eat a meal now, I feel full mentally and on the inside when I've had enough to eat.  I don't feel physically full, or that my stomach is reaching/has reached capacity in the way I used to feel at the end of a meal.  It feels odd and different initially and was quite disturbing for me the first time as it was a pretty hard and strong signal "STOP EATING. NOW! OR ELSE!".  Conversely, I don't get mad, desperate need or desire to eat.  I don't get cravings and when I'm preparing food I don't feel the need to graze because I can't wait until the meal itself.  I don't miss any foods I'm no longer eating, though I can appreciate that they were once delicious and desirable.  They're just not desirable any more. 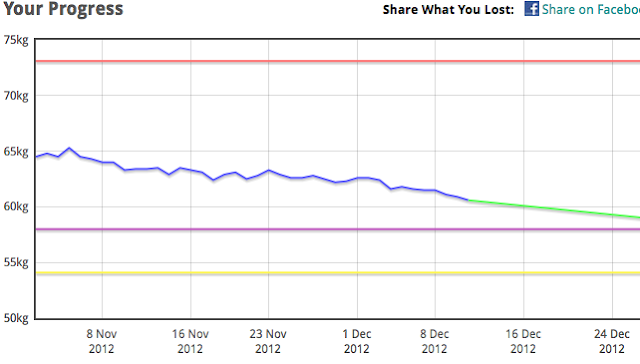 On an average daily intake of over 2,000kcals, the kcals value of which has not changed from before I changed to a low carbohydrate diet, I've now lost 4kg in 5 weeks.  And I've been drinking more wine than for the months before that (probably a bit too much, if I'm honest).


It really is that simple.  Keeping my amount of carbohydrate taken in below 50g a day (I've averaged 34.8g a day over 5 weeks) and eating as I feel otherwise (I'm logging food intake for interest and to keep an eye on the carb count), as Taubes, Volek and Phinney said, my weight is being "corrected" and it should reach an equilibrium point at some point and then stay there.  I have no idea what that weight might be and seeing as I'm the lightest I've been in my adult life, in fact since I hit puberty.

If you have struggled with your weight, find yourself getting a little heavier as you get older, are pre-diabetic, suffer from excess fat around your middle, have symptoms of metabolic syndrome, or are simply interested in the subject, I can recommend these books:-

I'm looking forward to exploring more and different recipes and meals in a couple of books that have caught my eye, but so far it's been delicious and exciting and I feel great.
Posted by TOTKat at 06:54