Low carb recipe: The best cheesecake ever! (and <6g carb per slice!) 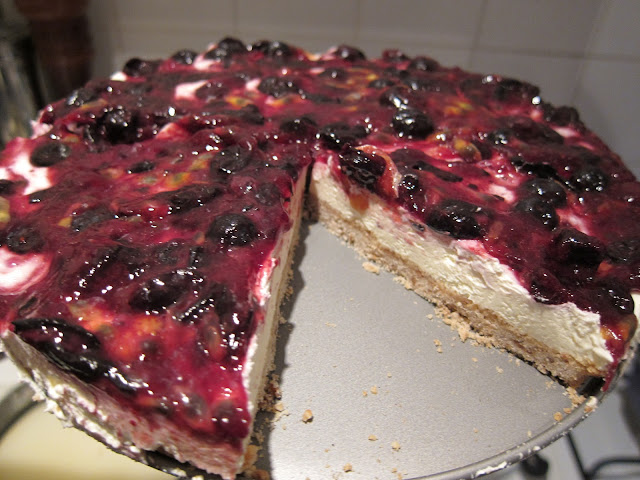 This is a stunning recipe (Warning: contains raw egg yolk! But you can leave that out.).  Totally experimental but it worked unbelievably well; so well that MrTOTKat was clamouring to make some himself as soon as the first one was half finished!  And so good that I didn't really get to take enough photos of it for you guys!  The one above is the original attempt and has extra passion fruit in the topping as I had no lemon juice around and needed to get some tang into the fruit.  The final recipe has no passion fruit in it, but you can add it if you want (for an extra 0.1g carb per slice of pie), and the cream/cheese layer is deeper than in the photo above.

Updated photo of the final recipe:- 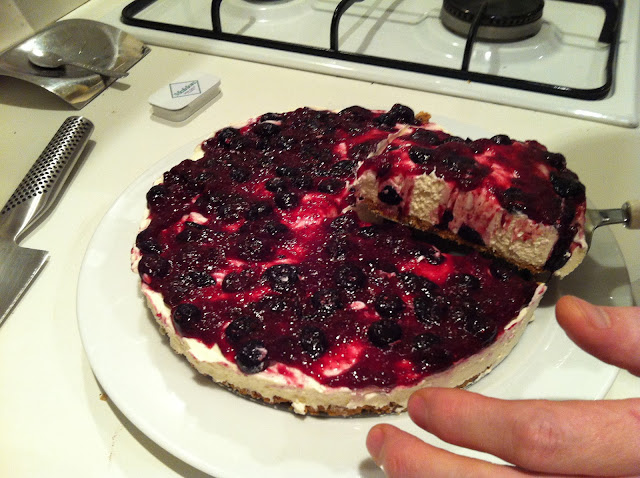 The recipe does contain a few ingredients that might be hard to get hold of, but I only had to get one of them from a "Health Food" shop (Holland and Barrett - hardly a brown rice and sandals shop any more).

You will need a few mixing bowls, a(n ideally spring-form or removable base) flan or cake tin, a method of whipping cream, kitchen scales, a metal spoon and a fork (for mashing fruit).

Ingredients:-
1. Preheat your oven to 135C.
2. Combine ground almonds, coconut flour, salt, cinnamon and stevia in a dry mixing bowl.
3. Melt the coconut oil gently (don't get it hot otherwise you'll prematurely cook the egg white in a minute) stir with the almond butter and add to the dry ingredients in the bowl.  Mix thoroughly.
4. Add the egg white to the bowl and make sure it's mixed in well.
5. Spread this mix over the base of a lightly greased/oiled flan or shallow cake tin and press down with the back of a metal spoon until firm.
6. Bake in the pre-heated oven for roughly 45 minutes, but start checking at 30 minutes. When the mix is the same even slightly darker colour, across the entire base remove from the oven and set aside to cool completely somewhere dry.

While the base is cooling...

7. Whip the cream until stiff.
8. In another bowl, blend (with a wooden spoon) the cream cheese, egg yolk (leave this out if you prefer), Splenda and vanilla extract to a creamy, golden, silky mixture.
9. Gently fold the whipped cream into this mixture and set aside in the fridge to keep cool.
10. Mash the blueberries a little with the lemon juice and xanthan gum; you want there to be some whole and part-mashed up berries, so don't go crazy.
11. Once everything is cooled and ready, spread the chilled cream cheese mixture on top of your biscuity base and smooth to a level top.
12. Spread the blueberry mash on top of that and then put the whole ensemble into the fridge until 15 minutes before you want to serve it.

Slice into 8 portions and serve! Goes nicely with a mellow coffee, a good strong English Breakfast tea blend or a chilled pink champagne if you're doing a special afternoon tea. 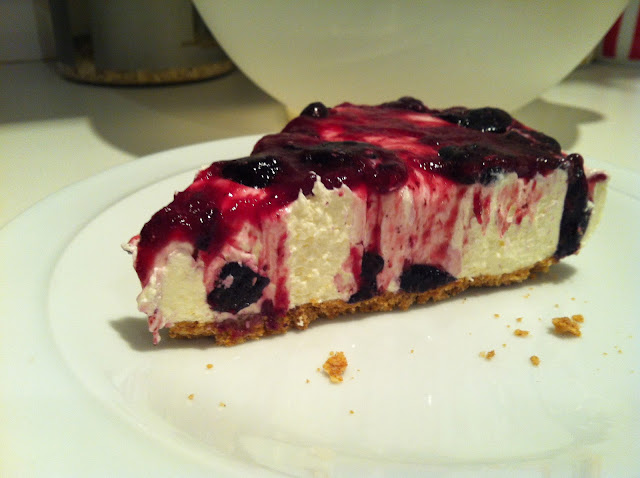