My office is in an area of the city which is undergoing lots of redevelopment; scaffolding and dug up road everywhere!  Anyway, this is resulting in lots of nice eateries and cafes popping up around the office; most recently a Brasserie Blanc which I can see from my desk.  It officially opened last night so we decided at about 5pm to go for dinner :o) 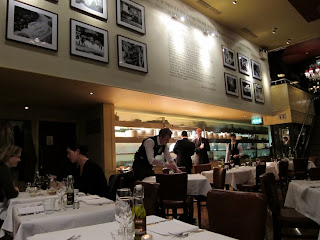 We both had the starter from the specials menu; a sausage salad with tiny poached egg and potatoes:- 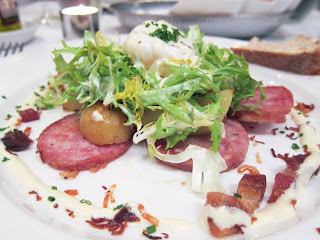 Which was pretty delicious.  The tiny piles of crisped wisps of onion were gorgeous!  The potatoes were just perfectly cooked and really tasted of potato, like the Castle Potatoes (a single, smallish potato still in its skin, sliced along the fat axis into 1/8" slices and, I think, roasted with no oil) I had with my slow cooked veal for main course.


Mr TOTKat (below) had steak for a main course and it was delicious!  Much better than the ones at Relais de Venise, L'Entrecote over the alley. 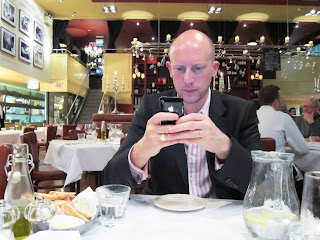 And it all went a bit pear-shaped after that and we ended up having loads of bread before the meal and at the end with cheese and dessert wine.  Oops!  Still!  It was a lovely night out and the food and drink was really rather good (though the cheese wasn't all that exciting, which was a tiny bit of a shame).  I don't think I'm going to be losing any more weight over the next couple of days :o)  (which is a good thing as I don't want to lose any more thanks very much!)
Posted by TOTKat at 18:28