Abel and Cole comes through again

After a weekend of mostly random and uncontrolled food, I decided on a salmon dinner so got out a couple of fillets in the morning to defrost with the plan of having them with some couscous and peas in the evening.  However,  this week's Abel and Cole box had a head of Swiss Chard in it.  I've never knowingly had that before and after a couple of days it was starting to droop and really needed using up.  So when I got home I was a bit worried we'd end up throwing it away.  Not knowing what it was going to taste like, I decided to have a nibble on a raw stalk to see.  I expected something sweet, clean and maybe with a hint of celery flavour, so the really quite salty flavour of the raw stalk was quite a surprise.  It worried me a bit, but decided to carry on and try to do something with it.

Flicking through the Abel and Cole recipe book to see if there were any chard recipes, I came across one for salmon and chard!  Cha-ching!  Perfect!  And we had all of the other ingredients in the house (except coriander leaves 'cause I can't stand the stuff anyway), onion, ginger, coconut milk, fresh tomatoes... 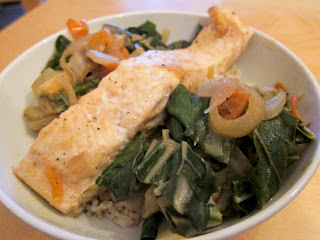 Thank you Abel and Cole, you saved the day again!  A great recipe, something new and different to break the monotony, and it's all seasonal and tasty.
Posted by TOTKat at 11:42