I've been having loads of fun and success with the Abel and Cole recipe book and on Friday got a couple more recipe books to poke through.  This time they're new edition Weight Watchers ones, using the Pro Points system, so it means that the recipes are more focussed around higher protein, lower carb, higher fibre recipes to help give a nutritionally more even meal with consideration to lowering overall empty kcals than would normally be found in a "diet" recipe book. 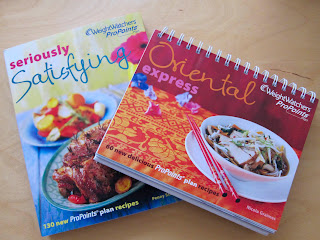 The two books are "Seriously Satisfying"  and "Oriental Express" (so new you can't buy it just yet) and on first flick through I'm really very pleased to see that nearly every single recipe calls for nothing that's pre-made (no jars or pots of pastes or sauces bar one recipe which asks for Balti curry paste) and I've only seen one recipe out of all of them that calls specifically for a Weight Watchers product (low fat cream in one of the desserts).  "Oriental Express" is published in a nice, clever design of ring binding and a built in stand so you can prop it up easily in the kitchen when cooking, rather than leaning the thing against the toaster or kettle and having it slide down and get in the way during cooking. 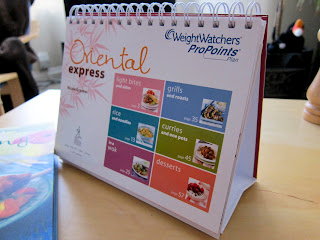 I really love flipping through recipe books to get ideas so I'm probably going to spend some time this morning poring over these two and working out what I'm going to try for lunch tomorrow.  Maybe something fresh and salady that's not utterly boring.  We've got a hare (from Abel and Cole) to roast for dinner, so that's already sorted and I don't want to leave that until it's been hanging around in the fridge for ages and then has to be cooked in a hurry.
Posted by TOTKat at 08:49