Fondantfitness asked a little while back, on a post of a recipe where almost everything was from Abel and Cole, if I use Abel and Cole much.  Well.

In November last year, I decided it'd be nice to give their organic veg box a try on a special offer where if you bought 3 boxes, one per week, they'd give you the fourth one for free.  I'd heard good things about the quality of their fruit and veg and although the perception was that they might be a bit expensive, I wanted to get good quality, tasty food where I have some idea of what's been used to grow it, where it's come from etc.  The fact that we throw away, on average, pretty much no food at all (and I really mean that, it's a bad month if I've had to throw even one item of food away), means that we can afford to buy better quality, more expensive ingredients as there's no waste compared with a lot of people.  Buuuuut, Abel and Cole aren't more expensive.  Not really.

So we had a couple of boxes.  And with the 3rd box, we got a free half dozen of eggs.  Which were really tasty.  So a few weeks later I added eggs in to the regular veg box order.  And I set the preferences to "I don't like potatoes" as we rarely eat potatoes.  And then we got some free bread.  Which was OK, but we eat very little bread, so.  I think there was some fish on special offer one week shortly after that, so I bought some.  And it was glorious!  So I bought some more.  Now we get all of our fish from Abel and Cole.  It is more expensive than Ocado, but it's tasty and, even better, where in a normal supermarket 2-pack of fish, the portions will be different sizes even by a little bit the Abel and Cole ones are -identical- every single time. 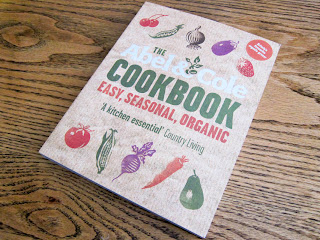 From there, with the odd other freebie here and there exposing us to new things, including the best ever one where we got the Abel and Cole Cookbook (which is almost my bible these days),  we got more and more meat and fish from Abel and Cole, culminating in an unforgettably good bone-in sirloin roast for the Christmas period.  We now get 80% of our vegetables from them (not lettuce as we need it to be iceberg and long lasting, with a once-weekly delivery that doesn't work for us), all of our fish, meat and eggs and the occasional herbs, cupboard goods etc.  It's all really good stuff, sometimes more expensive, sometimes not, but always worth it.  Always flavoursome.  And it's got me out of boring, habitual cookery, educated us to new and delicious vegetables (jerusalem artichoke is -amazing-!  kohlrabi... interesting and makes a good coleslaw.  black salsify - it's a black stick, but fabulous texture and flavour).  We're getting buffalo quite easily now and game is easily available.  We're eating better, more varied, more exciting food that's in season; getting more creative in the kitchen without huge amounts of extra effort.