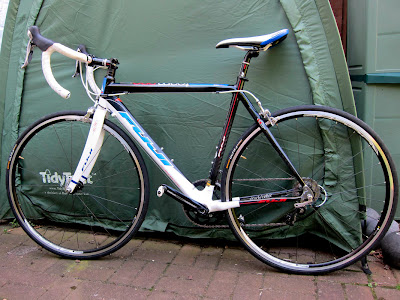 About 6 weeks ago, I bought a new racer.  For, er, racing.  But with one thing and another I didn't get to ride it much until the last couple of weekends. 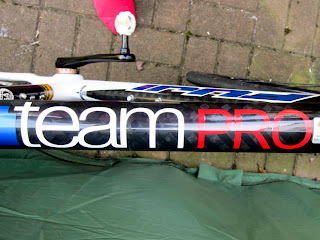 She's a beautiful Fuji Team Pro Special Edition; full carbon frame and forks, full Shimano 105 groupset, FSA gossamer crank, Shimano R500 wheels (these are gonna come off and get replaced with something else soon - and these are going on my repaired Felt commuter to replace the bent wheels from the crash - the replacements are gonna come soooooooon!). 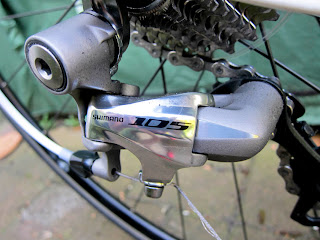 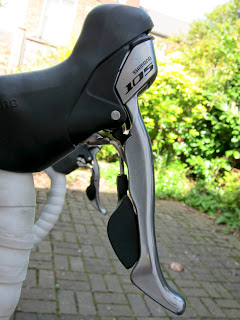 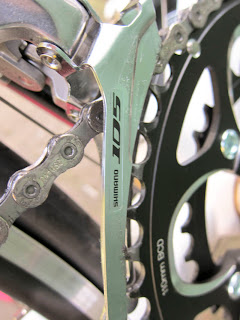 When I bought her, I got some Speedplay Zero pedals fitted which meant that I -had- to learn to use cleats before riding her.  (I know my own mind well enough that if I bought the pedals to fit myself later I'd wuss out and not bother...).

These are touted as really good and easy for people new to cleats for cycling (as well as being a lot easier on the knees as there is a certain amount of (adjustable) 'float' in the cleat which means you can rotate your foot a bit before they start to unclip, meaning your knees are not locked in a stressful position and you can adjust their position for comfort).  And ohgodyes they're so right!  I tried them around the block a few times on the Fuji and loved them so much I had another set fitted to my Felt (and yes, got to ride the Felt with them all of once before the bike got trashed :o/).

The pedals themselves are tiny and weigh almost nothing.

The cleats are huuuuuuge.  And it's essential to get "café covers", big rubber covers that clip over the cleats on the shoes so when you walk in them you don't either wreck the cleats or scuff up the flooring in a cafe/pub etc.  They pretty much saved me the day of my accident as if I hadn't had them I'd've had real trouble getting more than a few feet from the scene of the accident (my other shoes are at work or home, not in my rucksack) and I'd've totally ruined the cleats in minutes. 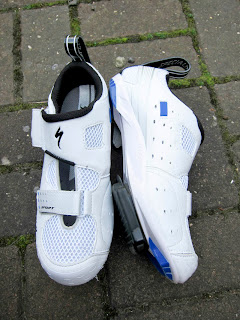 They're incredibly easy to clip in and even in pretty much an emergency stop, there's no panic to unclip, you just twist a bit more than a wriggle and out they come.  No problem at all (though I do find it more difficult on one side than the other, but then I cycle left-footed so I'm a bit weird in that respect).

You can see the "café cover" on the shoe on the right in the picture (the left shoe) on it's side; it's that black rubber thing near the toe end.  And those shoes are great for getting on and off really quickly, just unvelcro the larger strip, pull 'em on, velcro it up.  Same in reverse to get them off, no need at all to undo the top velcro strip and they're less than half (or even a third) the price of 'proper' triathlon bike shoes with just one velcro fastener.  Hah!

The bike... she -eats- up Wimbledon hill on the big ring!  Even after a 10 minute run to the gym, 50 minutes weight training in the gym, 15 minutes run to Evans to pick up the bike after her 6 week check-up, I mashed up Wimbledon hill straight away on the big ring and it was fiiiiiiiine.  This baby is my racer, my sweeeeet sweet racer and will be getting some Mavic Ksyrium Elite wheels real soon now - hopefully in time for the first Thames Turbo race on Easter Monday. 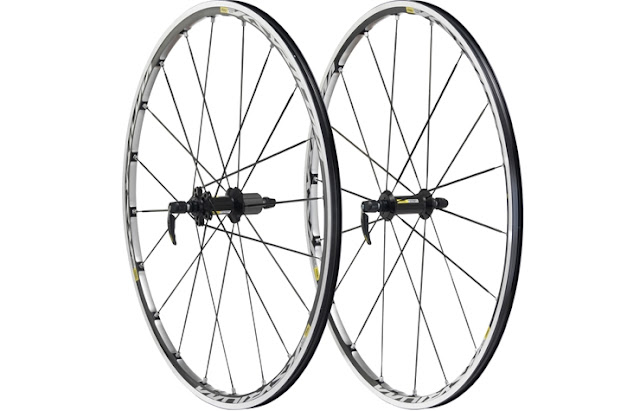 The killer will be that because of illness and injury and crashes I'm not all that well trained at the moment so the first sprint triathlon isn't going to be as good as it could be, plus there's new things to practice in transition as I used to cycle in my running trainers... I need to learn to clip the shoes to my bike, run barefoot to the bike start point and get my feet in the shoes while they're clipped on and do them up while I'm actually on the bike.  Really not so sure about that - I see falling off my bike in my future.  (Another plan would be to put a weak elastic band through the loops in the shoe heels and sling them around my neck to run to the bike start, then snap it, get the shoes on and then get on the bike.  Things to practice in advance for sure and I've only got 2 weeks!  I want to see what difference the new bike, cleats and wheels make but I'm not sure it'll be so easy to see with the additional slow-down around transition.  Swings and roundabouts perhaps.

Coming soon... pictures of my fixed-up Felt with new fork, wheels and handlebars (once they're all fitted).   With some mudguards and slightly knobblier tyres, that's going to be my 'bad weather' commuter and due to the government's cycle to work scheme, I'm getting a new summer/good weather commuter.  More on that when it arrives!
Posted by TOTKat at 16:31