We were supposed to go for a ride down to Brighton yesterday morning, but Mr TOTKat didn't much feel like it in the morning, so we cancelled that.  I still wanted to get a long ride in on my race bike so went looking for long routes online.  It's not so easy in London; routes are complex and full of turns if you want a nice ride that's not just "urban motorway" style.  So, I decided to head out of London and Worthing seemed like a good place to aim for.

I've driven down to Worthing in the past (about 10 years ago) and didn't remember the route so well other than you could take one road all the way.  I'd remembered it is mostly single-carriageway urban-ish roads with a bit of countryside and one or two short stretches of dual-carriageway.  That would have been nice and manageable had it been the reality of it...

I took the A24 all the way and ohboy was I wrong.  The first 10-11km took 45 minutes and I was getting more and more worried that it would be slow going with lots of traffic lights and towns all the way.  But 45 minutes for 11km in an 81km ride was not going to make for a fun or fast ride.

I got past Epsom at 13km and the game changed completely.  The road opened out to dual-carriageway and the "fun" began.  At some point after Leatherhead, there was a bit of a stretch with cycle path dedicated down the side, up a little way from the road carriageway and shared use with pedestrians (of which there were none at all).  The surface was terrible, covered in cracks, pot-holes, tree roots and the odd fallen branch right across the path, but at least it was a bit shady - the sun had come out in force and I was starting to regret the lack of sun-block.

More worryingly, having looked at the route elevation profile previously and seen it was pretty much long, slow uphill and downhill all the way, there were now signs for Box Hill.  *fear*  I was getting a bit tired in the legs already and in no state for any hills of any severity.  Thankfully, the A24 goes to one side of Box Hill and I was spared the humiliation of having to drop to my bottom gear and crawl up it, muttering to myself.

I started to get really hungry around 33-34km in, so decided to push on to half way and stop for lunch there.  It looked like that might be Horsham, but 41km came a bit before that and there was a handy pub right on a bend in the road... 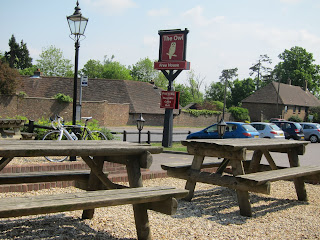 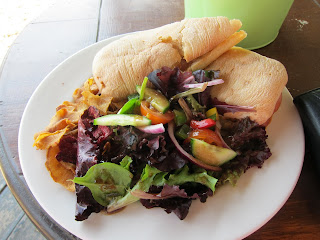 Fortified with a brie and bacon ciabatta with some vegetable crisps and a pint of orange and lemonade, I readied to leave the pub, to find a gaggle of ramblers gathered around my bike, admiring it.  *beam*

The rest of the way down to Worthing was dual-carriageway all the way.  Mean roads with quite a few mean drivers passing very close to me.  OK, you don't expect to find a cyclist on a road like that, but it is allowed and passing within inches when you're in a truck or large van isn't funny at all.  Vortices and all that.  Anyhoo, my arse got sore and I got pins and needles in my right hand, so there's a bit of adjustment to do with the setup of the bike, but I managed the first 41km in 1hr 50 minutes and the second 41km in 1hr 25 minutes thanks to some pretty fast road surface and looooong slow down-hills where I really got some speed up.  Total bike time 03:15, total time moving on the bike 03:10 (5 minutes of stoppage at traffic lights etc.)  Top speed of the day 50.6kph (though my bike computer went nuts and recorded a max speed of 138kph), average 25kph but in the second half I spent most of the time over 30kph.

I almost missed Worthing station and had to ask a pair of passing gents in flourescent yellow, on big, fat, beautiful BMW motorbikes for directions.  I was practically on top of the station and just needed to nip down a side road.  25 minutes before my train was due, so plenty of time to get a ticket, a huge full-fat latte with caramel syrup and scoff a Nutty 9 Bar as I was pretty hungry again.  The train was pretty busy for 4pm on a Thursday and bike space was short; also my connecting trains at Clapham all said "piss off, no bikes" (or similar) as it was "peak" hours when I got there.  Hey ho.  (I got on a train anyway even though it said no bikes allowed; it was empty enough that I wasn't in the way of anybody so sod them).

So, overall a pleasing ride.  A bit sunburnt on the arms and nose and a sore neck slightly.  A much better ride than the Brighton trip last time - only 1 stop for the whole journey and juuust less than 4 hours including that long stop at the pub, though there are pretty much no hills on this route at all so it's less taxing overall than the Brighton route.
Posted by TOTKat at 15:18