Mr TOTKat did a bit of a mad parkrun this morning.  Having decided to cycle to Eastbourne for their inaugural parkrun, he (unintentionally) tempted me to join him, but I knew I wouldn't be confident in being able to get to the start before 9am and didn't want to hold him back so I decided to do my long ride followed by a run by sitting on a turbo trainer in the garden, under a heater (and I still got cold toes!) for almost 4 hours before running around the neighbourhood a bit. 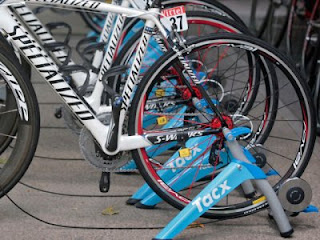 It seems that while the circumstances of our mornings were different in that Mr TOTKat went all the way to Eastbourne, leaving the house shortly after 04:30 and I didn't even leave the grounds of the house until after midday we had a shared experience overall.  We both felt great on the run.

We've both been training consistently since the end of December and we both felt completely fine running after just under 4 hours in the saddle.  I felt particularly pleasantly surprised when I started running off the bike... the sessions of brick circuits that Jez has had me doing in the gym(*) have made a huge difference to how my legs feel off the bike.  Previously, they'd feel almost like they were someone else's legs; heavy, wobbly and slow.  Today, I just felt like I'd had a really good warm up before my run, not that I'd been slogging in the saddle for nearly 4 hours, and I boinged off down the road.  Loving that very much!