National cycle routes.  They're a great idea, but ohboy is the signage on the routes a bit pants at times.  So, I got a bit lost today:- 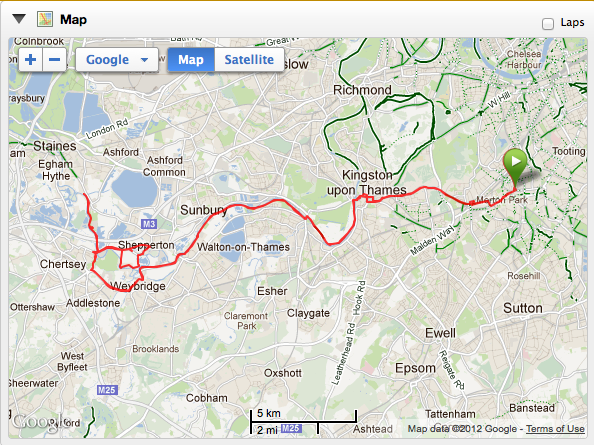 See that lovely bit where I go 'round in almost circles a couple of times between Shepperton and Chertsey?  That's because there's a critical junction where National Route 4 is sign posted in only one direction, but it's a little loop if you're coming in one direction so you cross it when you're going the other way and can end up going the other way and not noticing it.  Especially if you're taking the alternative bit of the route to avoid the bike ferry crossing (which is only 3 quid for 1x adult with 1x bike and runs every 15 minutes on request by ringing a bell). 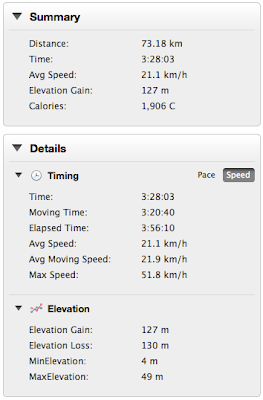 Anyway, it wasn't the end of the world and the route section I cycled today from Kingston, out West and back again, was a mix of road, on-pavement cycle path, gravel track, dirt track and paved pedestrian/bike shared use paths.  The majority of the surface and traffic conditions meant that I mostly kept to my objective today of staying in heart rate zone 1.  There was one hill which could have ruined it all, but thanks to the advice from Jonny Brownlee last week about getting into an appropriate gear -before- the hill starts rather than my old habit of hitting the base of a hill in a reasonably high gear and then trying to go down through the gears as I slow down (thus losing power quite rapidly), I managed to keep my heart rate much lower than usual on that hill.  The tow path along the side of the river was almost cobbled in places, otherwise dirt/mud tracks with exposed roots, pot-holes and lots of Sunday cyclists, runners and families out with dogs, so I had to keep my speed down to be polite most of the time.  OK, so there were a few times on the way back where I had to keep things in check as I found myself somewhat lamping it as the wind was less right in my face in that direction and the general, gentle, downwards gradient.  And I stopped a few times for drinks and food (yeah, I -still- can't take a drink in the saddle whilst moving but I'm working on it).

All in all, a good ride.  Objectives met despite getting a little bit off course a few times.  Plus, I got a bit of work in on getting out of the saddle and there's a lot of improvement there too.  Not to the point it'll be useful to get up hills, but again I'll get there and there's still a good bit of time before I really need it.
Posted by TOTKat at 18:11