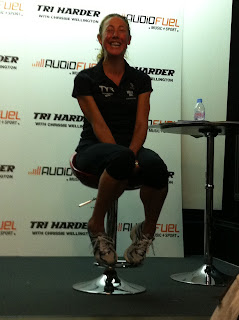 Wound up and fidgety, the woman who left everything out on the lava plains of Hawaii in October 2011 was sitting a couple of feet away from me on Monday evening this week.  Scar on her left calf, from a nasty bike crash two weeks out from the Ironman World Championships, still very much in evidence and from time to time, swinging her legs like a school girl while she told stories and answered questions from the audience.  She comes across as a bright, talented athlete with little time for voodoo and quackery and puts her trust in natural ability and the capacity for the human body to achieve really unbelievable things if you work hard and push yourself with the right training. 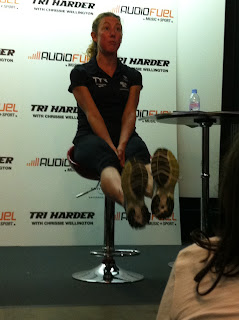 There are four sections to "Tri Harder - a comprehensive range of training programmes for triathletes and runners, designed and coached by World Ironman Champion Chrissie Wellington.".  LACE UP (with part of the proceeds going to CAF), Ride Harder, Run Faster and Relax With Chrissie.  We were treated to an explanation and demo of parts of the Tri Harder product - a set of audio tracks to help a triathlete run and bike faster, plus a couple of relaxation and mental preparation ones.  A chirpy young lady called Ellie, a personal trainer from Barnes, demoed a section of one of the bike tracks on a turbo trainer and then Shaun from Audio Fuel persuaded Chrissie to demo part of one of the run tracks on a treadmill.  Thankfully for those of us in the room who are amateur athletes, Chrissie had the good grace to be a bit breathless after a few minutes at 18kph on the treadmill! 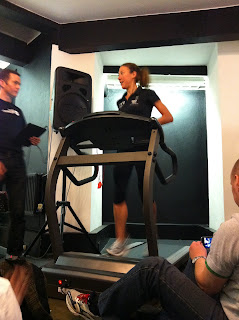 After the demos, it was time for Q&A with Chrissie and the floor was opened up for questions.  Mr TOTKat asked the final one, around being a first time Ironman trainee this year and what tips she might have for a first timer.  Chrissie was wonderfully supportive and positive and quite honest with her answers and explained a bit about Kona 2011 and finally getting to actually race.  Getting to the start line knowing that winning was not a certainty and probably not even a likelihood.  Having to live in the moment throughout the race, facing the very strong temptation many many times to pull over and stop and beating it every time.  She talked about her first pro coach and what he said when she asked him if she had what it took to be a professional triathlete and he answers that yes; "(you've) physically got what it takes but we'll need to chop your head off".  At the time, Chrissie was over-analysing, over-thinking, beating up after a bad training session and being really hard on herself all the time.  Rest and relaxation she saw as "weakness".  Mr TOTKat commented to me afterwards the parallels he sees between that and me (a flattering comment, but the way it was intended was more that I have similar challenges to that one Chrissie had way back).

So, aside from the great opportunity to meet such an inspiring, strong, world champion as Chrissie Wellington (every time I hit a hard patch in a training session, I think of what she's achieved, her great big smile, how strong she is and I push on through - it's true to say she is my greatest inspiration in my Ironman journey), I think the Tri Harder suite has bits of interest to me.  I certainly would like to take a look at the LACE UP and Relax components as they cover areas of particular challenge for me; not so much the Run and Cycle ones as I do have a coach who has a programme, drills and training sessions for me.

Messages from Chrissie that I took away from the evening are:
Next on the awesome luck and World Champion heroes front comes later today... we go for a bike ride and a run with Ali and Jonny Brownlee.  Watch this space for what we get up to and exactly how humbled we are by putting in physical effort alongside superlative athletes.
Posted by TOTKat at 09:30