A while back I was introduced to Mrs Crimble's Chocolate Orange macaroons which were utterly delicious.  Lovely flavour, moist texture and don't leave you covered in crumbs.  Now Mrs Crimbles has brought out a new look and a new taste. 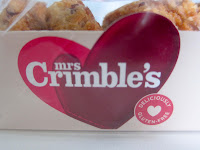 Mrs Crimble’s, one of Britain’s best-loved bakery brands, has had a total makeover and has launched a brand new product.  With the new strapline ‘let’s bake love’ Mrs Crimble’s has shrugged off her cardie and is ready to party.  The new packaging is brighter, bolder and more contemporary.  It captures the pleasure that comes with biting into a Mrs Crimble’s Choc Macaroon or discovering a large chocolate chip buried deep inside a remarkably chocolatey Double Choc Brownie.
‘Our new logo is heart incorporating an oven glove,’ explains head honcho, Jeremy Woods. ‘It symbolises the love that people have for Mrs Crimble’s products.’ 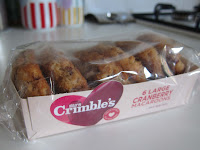 They're labelled as "large", and they're certainly bigger than the chocolate orange ones but I wouldn't call them large in isolation; I'd expect them to be the size of those big cookies you get in bakeries.  Anyway, that's a nit-picky point and I think Mrs Crimbles has really done it again; these are utterly delicious.

As with the chocolate orange macaroons, the initial hit you get is of sweet, moist coconut as you'd want from a good macaroon.  The next delightful flavour you get is of cranberries but they're not scarily tangy, they're more like raspberry jam.  So the overall effect is very much like a Bakewell tart.  So, with a mug of tea, it's like having a Bakewell tart but without all the heavy icing that comes with a Bakewell tart.  And I really like it. 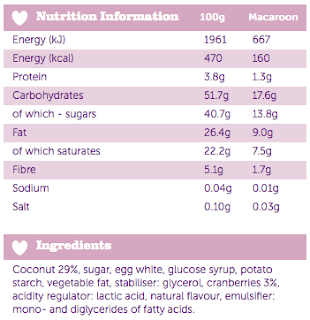 Thinking in terms of fuelling long rides (or runs), I wondered whether these macaroons might be an option.  The criteria for me is tasty, high carb (preferably complex and simple mixed), calorie dense, not crumbly and not high in other macro-nutrients than carbohydrate.  Let's take a look then; tasty - tick, high carb - tick, mix of complex and simple carbs - nope, calorie dense - tick, not crumbly - tick, low in other macro-nutrients - no.

On balance, given the "no"s are important ones but there are a lot of "tick"s, I think these would be best kept to one or two on a long ride to help with variety in flavour and texture.  These macaroons are very nice and I really like them; more than the chocolate orange version.

(As a bonus, they're gluten free for those who have difficulties and preferences that way.)