A quick little parkrun (Upton Court Park) this morning.  5km in the marshy, squishy grass and a bit on paths on a pretty flat course.  A bit slippery in places but I thought I'd give it a bit in advance of tomorrow's half.

Stuff the time, I actually don't care about that.  There were more interesting revelations today.

I thought my HRmax was 192, and that's certainly the highest I've ever managed while being puce in the face and about to throw up while running uphill when I first decided to try running.  Turns out I'm wrong. 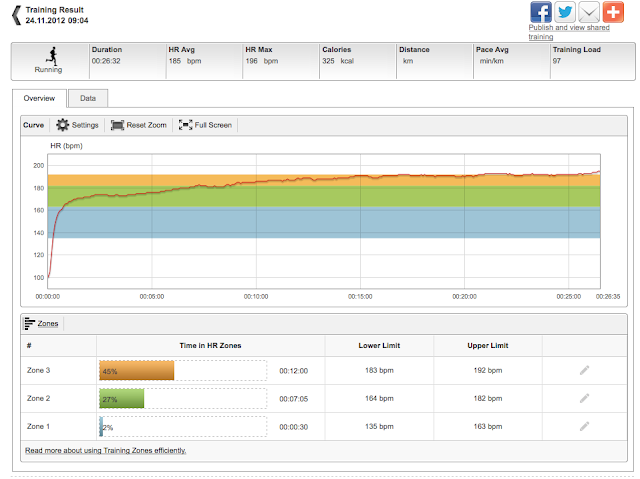 There is no way on god's earth that 192 is my HRmax, nor is 196 BPM.  Nobody can hold 99% of their maximum heart rate for 12 minutes, or even 5 minutes, though some elites may be able to hold it for a couple of minutes or so(*)  Makes me really wonder what my HRmax is.  I've known for a while that it must be higher than 192 due to several training sessions and parkruns where I've held 98%+ of 192 for several to tens of minutes.

And the thing is, I felt that it was my legs that were the limiting factor, not my cardiovascular and respiratory bits.  (Phinney et. al. have a lot to say about CO2 removal during exercise as a fat-fuelled athlete and that you need to do less of it, so you need to breathe less hard in the exhalation - more reading required).  I'm really rather excited by this indeed.  It seems to say that I can push harder (once I get a bit more strength and endurance into my leg muscles) and most likely harder for longer with this new fuelling mechanism.  So, once I'm a bit fitter, I'd like to go for the hideous torture that is an HRmax test to find out what it really could be and then I can adjust training zones appropriately and get even more out of it all.

* - From Lore of Running