Mirror mirror... who is the chubbiest?

Since Ironman UK this year, I've put on just under 4kg.  Now, given at the time of the race I was about 2-4kg heavier than what might (still don't know for sure) be a good "racing weight" for me at the time, that puts me now more than a stone over a good racing weight.  That's a lot.  And quite depressing.  In the off-season, it's recommended not to gain more than 4% if your total ideal racing bodyweight; 4kg is almost 7% for me. 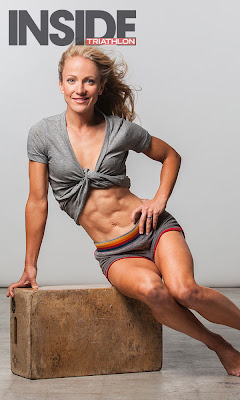 OK, so I'm not a professional athlete and paying the mortgage doesn't depend on my athletic performance (or looks), but I revert to being a normal human being when I see photos of female pro athletes and feel utterly fat and inferior.

See here the lovely Lesley Paterson - two time XTerra World Champion and all sorts of other triathlon successes as a pro athlete.  My god she's buff!  Look at those thighs, biceps, calves and abs!  Now I know I have some pretty mean muscles myself (albeit a tiny bit depleted in the arms due to lack of being allowed to do stuff), but they're fairly well hidden under a layer of reasonably thick fat.

6-8kg fat is a lot of fat.  Really a lot.  Fat isn't particularly dense, so volume-wise that's quite big.  And that means I have problems with clothes that are in any way structural (e.g. bras, belts, things with waist-bands) in that the structural bits dig in to the fat bits and make it look awful (sausages!).  Plus, dammit, since I got fit, I got vain!  I liked looking almost good in clothes - sports or otherwise - I was hovering around the 20% body fat mark!  And 6-8kg of fat is, well, 6-8kg of extra weight to be schlepping around and slowing me down when running, for example.  (Hello Thames Turbo half marathon in less than a month's time.)
The answer is simple, yes?  I've done it before; losing weight.  But... it was different then.  I wasn't exercising at all and I was miserable and needed something to control in my life.  And as energy intake and expenditure is all a bit inexact on a normal day-to-day basis, the more exercise you do, the bigger the errors get.  I could compensate by assuming minimal calorie expenditure with exercise, but that could cause other problems like changes in how my body processes food and under what circumstances.  It's all so much more complicated now!  Add in the fact that for the last 10 weeks I've been unable to do a lot of the exercise I'd been doing that magically lost me 4kg leading in to the start of the season this year, and I'm still not doing any of that level of exercise and won't be for a while even when I am allowed to start rehabilitating the muscles in my arms.

And then there's the festive seasons... my birthday, Halloween, Bonfire Night, pre-Christmas, Christmas, post-Christmas, New Year... all great excuses to pork-out/drink lots but also great excuses to dress up in nice clothes that I don't look so hot in right now.  Wah!

So, do I call truce on myself and accept that I don't -need- to lose body fat at the moment as I'm neither unhealthily overweight (and inactive), nor does my livelihood depend on it, and the mental benefits of being less than strict might be good for me?  Or do I start to put some effort in, stick to calorie deficit, lock things down and drop those pounds?  (WLR reckons 3rd Feb to hit the top of my race weight window if I stick to 500kcals deficit per day and a 500g weight loss per week)  Given that I will want to focus a lot more and the mental effort required to do that 100% almost daily only lasts for so long (6-7 months in my experience) do I want to fritter that mental energy away now when I've got races up until the middle of November next year?