Are we there yet?

It's been 16 days since I started on a "very low carb" diet of under 50g carbohydrate a day.  In theory, it takes 2-3 weeks of constantly low insulin knocking about to flip that fat burning switch.  So, am I adapted yet?  How can I tell?  Has my carbohydrate level been low enough?  All of the data that drives the 50g threshold comes from studies that have been on men, so it might be that due to my different absolute body-weight and/or hormone profile, I might need to go even lower with carbs to adapt.  If I don't know whether I have or haven't adapted, I don't know if 50g was low enough (though, to be fair, most days it's been very comfortably under 50g and, on average, around 6% of my total caloric intake). 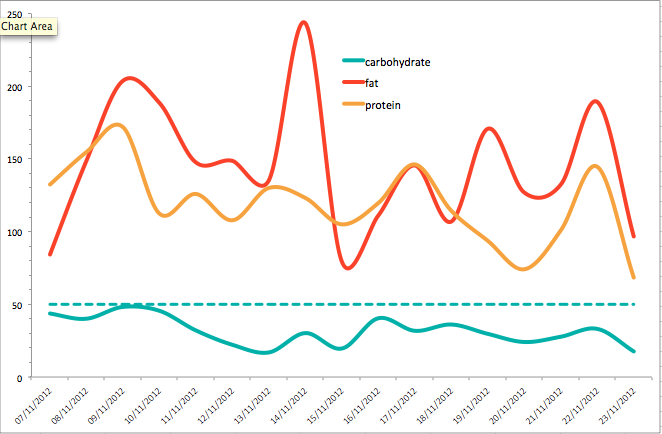 Having not noticeably had ketone-smelling breath, I'm not sure whether I have adapted or not.  I've been drinking a lot of coffee so it could be hard to tell whether my breath is that sort of smelly through the coffee smell.  And that's not the be all and end all of it either, so I have no idea.  The only real way to find out is have a gas analysis test.

And that's exactly what I'm planning to do.  Cadence Performance in Crystal Palace do RMR and Steady State Fuel Analysis testing (along with a whole bunch of other exciting things) and I'll hopefully be going in next weekend at the beginning of December to get strapped into some contraptions and analysed.  That should help me to understand whether I've got there to being fat adapted by then, and if not then I'll have to think about lowering the threshold for carbohydrate and/or examining what I'm eating in a bit more detail.

This weekend, however, I have to drag myself around a half marathon in an indeterminate fuelling state.  This will be... interesting.  My pace has been low since I started back after surgery and it's not really got any better in the last couple of weeks.  The longest I've run for is 90 minutes and that was 2 weeks ago.  I'm thinking I'll not be breaking any PBs on Sunday but I'm more worried that I may actually bonk if I'm not adapted enough yet.  And that would be very miserable indeed as I wouldn't want to crack and eat a banana; the insulin spike would strike fear into me.  However, if I make it around the course and I don't bonk, that would be rather a successful outcome indeed.  We shall see!
Posted by TOTKat at 11:38