It arrived on a rainy day, so the box got a bit wet on the way home from the tube station... 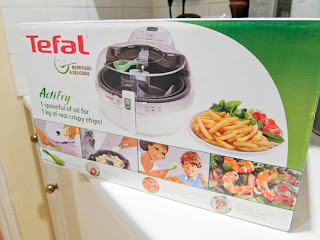 Hence the grey spots on the box here.  As you can see, the packaging is a bit dated-looking (I dunno about you but I always find cartoon pictures of "mummy and child" really 1970s no matter how re-vamped the cartoon style may be) but then who cares about the packaging as that's off to the recycling!  It does seem to have been designed by a European marketing team and the words are a bit clumsy for the UK market. 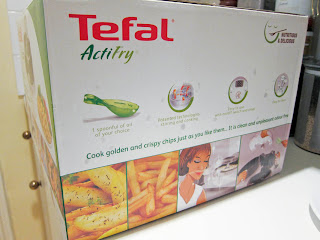 The eagle-eyed reader may notice that it's a pretty big box and almost takes up the entire depth of my (admittedly quite shallow) kitchen work top.  And that's a good indication of the size of the appliance inside as the packaging inside the box is mercifully sparse; enough to protect it but not way over the top on loads of plastic bags over every single component and manual and booklet and plug and removable part.  That's quite refreshing and means I feel less bad about the packaging part of this new toy at least.

It arrived on a day when I got home late from work, ravenously hungry and with no idea about what to do for dinner, beyond the fact that I'd got a couple of Abel & Cole salmon fillets out of the freezer in the morning.  Which meant that, of course, I had to try cooking something in the new ActiFry regardless of whether it actually went with the fish or not.  Thankfully I had some sweet potatoes to hand and decided that sweet potato wedges would be a good compromise between seeing if it worked, something that could potentially get a bit crispy, and not actually making chips (partly because I didn't fancy peeling and chipping potatoes when quite so weary already). 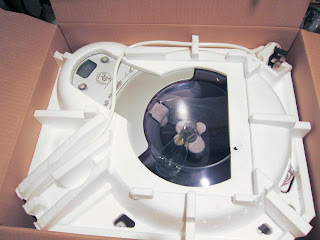 We generally don't peel root vegetables unless the skins are particularly tough and rough/have an unpleasantly textured skin.  So all I had to do was flick through the included recipe booklet to the chips and wedges section to get an idea of what to do, check the quick start guide on how to make the thing actually cook, wedge up the sweet potatoes, toss them in oil then flour and paprika, whack them in the bowl on top of the turning screw, drizzle a bit more oil on top, set the timer and press go.

So I did all of that, after picking off a few errant bobbles of polystyrene from the inside of the lid, pressed the "On/Off" button and then was rather taken aback by the noise of the thing!  You see, what makes it clever is -how- it cooks the food.  Not just by getting it hot.  It uses hot air circulated in the chamber and a low-angle screw to agitate and turn the food over and the way it gets the hot air to move in the right way is a fan.  In general fans are noisy and this one is no exception.  What makes it simple is that there are only two settings, On and Off.  There is a timer which you can set and once you press the "On/Off" button, the heating, fans, screw and timer start up.  All that happens at the end of the timing is some beeping.  It does not turn itself off. 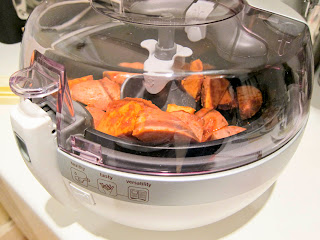 However, it's rather effective and after 40 minutes we had some crispy skinned, wonderfully soft inside, nicely seasoned sweet potato wedges.  I did read the quick start guide properly -after- we'd had dinner and I did a few things wrong: you're not supposed to use salt before cooking anything like wedges/chips (probably because that draws water out of the vegetable and stops them crisping properly) and you're supposed to wash and completely dry the wedges/chips before cooking them; again for anti-sogginess, but I kinda knew that and didn't mind squishy sweet potato wedges
as that's part of their charm usually so I was more than pleasantly surprised by the really crispy skins we ended up with. 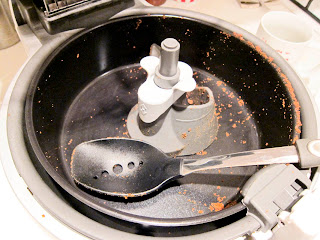 And it's pretty simple to clean afterwards.  You can simply pop the pan out with the screw and with judicious application of a kitchen towel and a bit of shaking about it's clean enough for me after this sort of recipe.  As you can see, all that's left at the end of the cooking is a pile of crispy crumbs of seasoning and pretty much no greasiness that can't be shifted with a bit of kitchen towel.
So, initial impressions are that it's a clever toy, takes up a reasonable amount of space, is really quite noisy, but the final results are not bad at all.  Full review to follow in a few weeks after I've had much more of a chance to play with it, try more recipes (the booklet that came with it has a few surprises in it which I'm hoping to get to try) and put various bits through the dishwasher.
Posted by TOTKat at 09:23