I think I might get 'round next weekend.  If I can work out how to get the k-tape to stay on through the swim, it's going to work.

T2 brick test today; 31km bike followed immediately by a 7.8km run.  The secondary tests were, some race fuel (High5 EnergySource) to see if my stomach is OK with it, and drinking on the bike.

Apart from being yelled at by a twat in a Chelsea Tractor at Wimbledon Common (dude, if you had a less stupid car and a bit less of a vein sticking out on your forehead, you'll probably live longer), the bike was good.  I'm still completely useless at using a bottle on the bike - seriously, if you've never tried it, it's a lot harder than it looks.  I can get the bottle out of the rack relatively OK as long as I'm free-wheeling, but drinking is really difficult and getting it back in the rack again is pretty stressful.  I ended up with sticky drink on my hands, handlebars and down my leg a bit and some of it in my mouth.  My heart rate monitor hadn't worked for the cycle, so fuelling was really going to be a bit off as I'd got no idea of the amount I'd burned through. 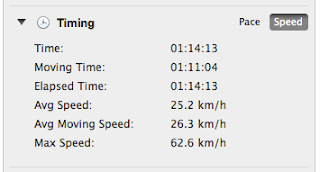 I chugged the remainder of the fuel drink and the run started off pretty nicely.  As usual between bike and run, my legs felt a bit heavy at the start but I went off at a reasonable pace and the route was a loop of around 2.5km which allowed for stuff going wrong and being not too far from home if it did. 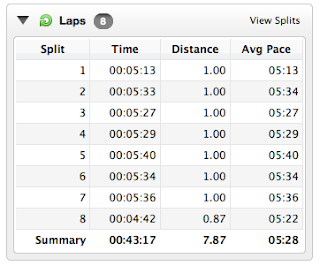 Pace-wise, that's around my usual fastest 10km pace -without- having cycled 31km first.  So I'm quite encouraged by that.  That sort of pace should give me a 10km run time of around 55:00 - 56:00, hopefully.   My knee stayed quiet throughout and the only indication of anything not being perfectly fine was a tight hamstring into the back of the knee and that was it.