Achey knee and a bit delicate

Feeling a tiny bit delicate after Mr TOTKat's birthday celebrations last night.  A couple more beers than I'm used to so rubbish quality sleep and quite tired today.  Gentle day today, day off work and I should be right as rain tomorrow.

5am start was a bit harder than last time.  No idea why but it just felt ickier.  Thus followed a catalogue of small errors that could have made lots of dents in my race performance...

First off, last time I had fruity malt loaf with peanut butter for breakfast which worked really well; this time I had yogurt with fruit compote, muesli and chopped banana.  I had real trouble eating it and it didn't feel nice in my stomach at all.  Error number two was, er, number twos related.  I suddenly needed to go with less than 10 minutes to go before the start of the race and we were in the first wave of swimmers so I didn't have long.  Queue of 7 people for 2 loos!  Argh!  Got all flustered trying to get my tri-suit back on again so it took ages (the zip is up the back and goes through the "ladies support" section elastication so it's really hard to do up) and I ended up trotting back to where Mr TOTKat was waiting for the start of the race with only about 30s to spare before ditching our warm clothes for the swim.

The swim felt vile again; I think I just don't fare well swimming from cold and first thing in the morning.  I got overtaken once which was really downheartening especially given that I had to wait at the side of the pool for a good 20s for the overtaker to actually do the overtake and then she didn't whizz off ahead of me, so I just ended up with a bit of a draft for the last 4 lengths. 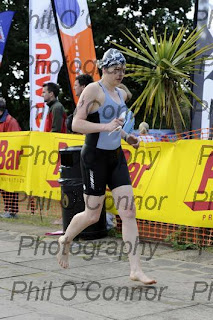 A little trot to transition and my bike where Mr TOTKat was almost ready to go off (he was race #16 and I was #17 so we were very close together) and I made errors number #3 and #4; I put my running/cycling top with my race numbers pinned to it on backwards so had to tear it off again, lost two pins from the front number by doing that, and jam it back on the right way around after finding one of the pins that had pinged off and pinning both back in place.  I lost a good minute or so there.  *sigh*  Then I put on my helmet and did it up, decided not to bother with socks, jammed my trainers on and grabbed my cycling gloves to put on whilst running out to the cycle start.  Mistake #5 there.  Of course you can't put gloves on whilst wheeling a bike and trying to run a bit!  So I ended up with them wedged under my palms against the handlebars which meant that gear changes and braking were impeded and tricky. 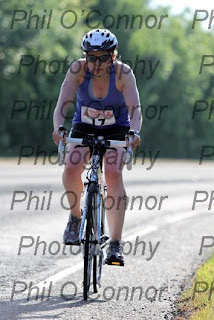 I then spent the next few minutes of the cycling deciding to try to stuff them down my top (mistake #6).  Hah.  My tri-suit goes quite high and I'm not stable enough on the bike to take hands off the bars (so yes, I can't signal at the moment).  So the next few minutes were spent mostly thinking about what to do with my damned gloves rather than concentrating on cycling quickly.  I eventually decided to lose them.  Left hand, easy, just lift it up a bit and let the glove drop.  Right hand... well, less easy as I didn't want the glove to drop into my chain or wheel and foul it up so I had to get my hand down to the middle of the handlebars whilst not losing the glove, get the other hand close on the bars, pass the glove to my left hand, move my right one back to where it should be, similarly the left and then drop the glove somewhere safe.  Faff!  Wasted thinking and effort and speed!  Still, once they were gone I could actually concentrate on cycling.

The rest of the cycle was pretty sore-butt-making as the roads aren't in great condition and this new bike is a lot stiffer and less forgiving.  And the last 6km it got quite windy, which dropped my average speed from 28km/h down to 23km/h.  So, overall a very disappointing cycle.  But the run... 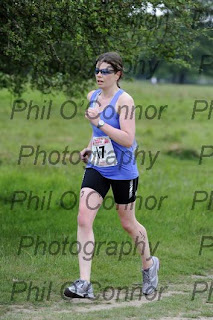 ...started as usual with legs made of puffed lead, or so it feels.  It took a few minutes for them to loosen up and feel normal(ish).  As I rounded a corner where you can see the start of the run join up with the circuits, I saw Mr TOTKat heading for the half-way mark of the run.  Disheartening as all hell as it meant he was 15 minutes ahead of me and I was expecting to be only 10 minutes behind.  Still, the kids helping out the marshalls were really encouraging and spurred me on a bit and I even managed a sprint finish right at the end :o)  Watch time 01:34:21 so with up to 7 minutes to cut off that time for the non-racing portion I was well in for hitting or even beating my target time of 01:30 for the race.

Official results: 01:28:32 beating my last race time by exactly 6 minutes and 30 seconds!  I did improve on the swim+transition by 1 minute and 13 seconds, despite the faffery with the backwards top and re-pinning my number.  I improved on the bike time by less than I'd hoped (2 minutes 26 seconds) but the really pleasing part was the run+transition improvement of 2 minutes 51 seconds!  Very very pleased with that improvement indeed; a whole 9% :oD  Overall 7% improvement in the race time and exactly 1000kcals burned.
Posted by TOTKat at 13:02