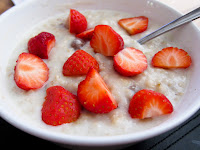 By the time I got to today's gymming, I still had DOMS all through my core from Sunday's session.  This makes press-ups, rowing, pull-ups etc. a bit difficult and I got really quite wobbly a bit earlier in the press-ups than last time.

This morning, I decided to try a porridge experiment (mostly because there were no flaked almonds left and I like them with my yogurt a lot more than not having them in it) involving soaking the oats overnight in the fridge.  So, oats, water, raisins, honey and a spoon of mascarpone went into a bowl in the fridge overnight.  Vile, vomitous-looking mix came out in the morning, I must say, as the mascarpone just sat there in little chunks.  Still, I mixed it, microwaved it for 2 minutes, mixed it some more and microwaved for another minute and out came a beautiful, creamy, thick porridge; to which I added some chopped strawberries.  And it was nice, though the strawberries that didn't sink and get heated up didn't really go very well with the porridge - too acidic - the heated up ones went a bit mushy and much nicer.  So.  Score for the porridge. 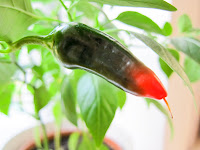 I was gymming today so lots of snacks and gymmage went OK apart from the wobbliness; I'm going to up the dumbbells in the side planks with rows as the 6kgs are getting a bit easy now.  I'm still on 6kg with 3x8 each side on the lunges with cross-over arm raise things, my triceps really feel it especially on the left.  I'll try to hit 10 each set next time, but it'll be quite a struggle.  And another 8, 8, 10 with 25kg barbell on the clean and press which I'm still quite chuffed with, but I want to make it to 3x8 with 30kg by the end of next week when I'll see my trainer again.

When I got home today, apart from the mysterious half-eaten sausage on the lounge floor with one kitteh sat on his bed ignoring it and the other one AWOL (I would love to know where it came from and how, 'cause we don't have any sausages in the house, never mind cooked ones like the one I found), I found my chilli plant has finally got a ripening chilli on it - and it's pretty!  I was starting to worry that they weren't ripening, but it looks like the warmer temperatures now are setting it off; which is great.  Very pleased :o) 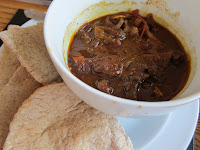 So pleased, that I heated up a frozen goat vindaloo for dinner with a couple of toasted wholemeal pitta breads to mop it up (I really couldn't be bothered to cook up any rice) and ohhhhh....

As with chilli con carne, bolognese sauce and curries in general, the goat curry had really improved with freezing and re-heating and it was really really nice.  There's one portion left and it miiiiight still be there when Mr TOTKat gets home for him to eat, but I might get the munchies before then ;o)