Brekkie in bed, brought by Mr TOTKat after he'd got back from his morning run :o)  So that was nice.  I've done loads of domestic bits and bobs today; 3x washing loads, stripped the bed, made nut and seed bars... 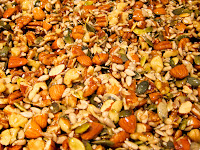 So.  I made fruit and nut bars before twice now and they worked really well.  I decided to try to replicate 9 Bars myself but instead of oil and sugar to bind the bars, I decided to use just honey.  Oops.  As I was pressing the mix down into the grease-proof paper lined oven dish I could see that the mix was sticking really badly to the paper.  When it was cooked and pretty much cooled, I turned over the slab and... ohyes the paper was totally stuck, the honey had sunk to the bottom and was still very very sticky. 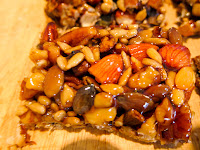 It's all chopped up into bits now and I've stuck it in the fridge to try to firm it up a bit.  I suspect it will have to stay in there until the second before it's eaten.  You can see here that it's all shiny from the honey (it's bottom-side up here in the photo).  It's pretty clear that the peanut butter mixed with the honey in the fruit and nut bars I made before helps to emulsify the honey as bit and keep it drier.  Eh, you live and learn.  These are going to be really tasty little bars, but a total nightmare to handle, plus some of them still have bits of greaseproof paper stuck pretty hard to them. 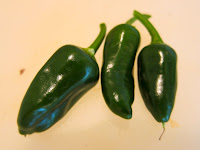 I also made up a chilli batch today and I think it's a good one.  The only annoying thing was that we actually didn't have any fresh chillies left.  I did put a lot of cayenne into the chilli sauce, but the whole point is that there are chilli peppers in there.  So I decided to bite the bullet and harvest some of my chillies to add in.  The biggest, plumpest three on the plant were selected and plucked but they looks so small on the chopping board and despite being really crisp and juicy, I don't think they were anywhere near ready to be picked despite having been on the plant for a month now. 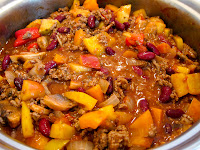 It does taste really good so far so after a good old freeze and re-heat I'm pretty confident this is going to be pretty tasty in the end.  Plus, I'm definitely going to have a few lunches out of this batch as well as dinners.  Chilli for lunch really does rock!  You can see most of the apple rising to the top as the chilli matures here.  We usually put apple, pear and raisins in the chilli which gives it a certain sweetness and richness but pears are not good at the moment and I actually forgot the raisins this time!