Still with the DOMS then

Pecs, shoulders, arms etc. all still DOMSy since Friday's session.  Must've really given them something to think about :o)  I did do a bit of gym yesterday, some rubbish cardio which earned me naff all kcals and naff all enjoyment, though it -was- fun gymming with Mr TOTKat and I did do some weighted lunges at the end (I figured my current routine isn't legs heavy so it wouldn't be -too- bad to work them a bit the day after a weights routine). 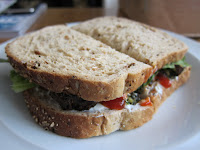 Rest day today and a sarnie for lunch; I do tend to have bready lunches at the weekend for a nice change, though it's not white bread - today's being roasted spinach falafel, cream cheese, lettuce and tomato relish on wholemeal granary bread.

Waitrose are doing some really protein-rich yellowfin tuna at the moment (line-caught) so I got some in and we had it for dinner - 31.5g protein per 100g and the steaks are 140g, so that's a whopping 44g protein in the fish alone! 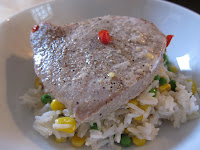 I had hoped to use one of my home-grown chillies this evening, but they're still not quite ready to harvest even as green chillies just yet.  How much longer, I wonder?  I was feeling a little short on fruit and veg today, so chopped some mango and banana to have with greek yogurt, with a sprinkle of mango on top... still not sure about maca really, it is quite bitter and harsh as flavours go, despite smelling like caramel and tasting a bit that way too.  There's the same amount of banana and mango in a tub for a morning snack tomorrow (maaaybe I'll add some yogurt in too as it's a pre-gym snack). 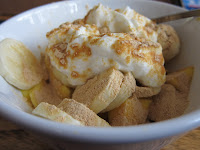 Having found my old personal trainer's measurements sheet again, I ran through some stats (weight, waist, chest, hips, butt, thigh, knee and arm measurements) in Excel and decided to put in some measurements for today just to catch it up a bit.    I braved the body fat measurement machine (full body bio-impedance jobbie) and was pleasantly surprised to see that I'm only 0.5% up on where I was in March.  I could claw that back in a month if I wanted to and hopefully lose the sofa-button look for the next triathlon; though I did say that if I did the last one in less than 1 hour 29 minutes, I'd buy a new all-one-colour tri-suit which would be more flattering than my current one.  I can't really justify that until August's pay packet as I'm really skint at the moment, but selling my Joggler and getting my fee from the Daily Mirror for the article last year will cover a new tri-suit, so I just might treat myself. 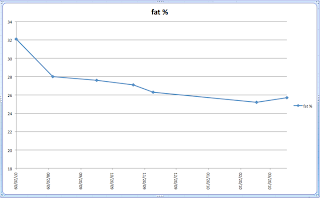 Not buying anything at all over 3 months might be a touch hard, though I've done that kind of thing before.  (I do plan to spend up to £15 on a pair of shorts from New Look, but that's about it.)  But, it is really good to look back and see what I've achieved in transforming my body shape with exercise since I started going to the gym - 7% total body fat loss is not to be sniffed at!

Yes, there's a little upturn at the end, which is due to some excess around many recent triathlons and celebrations and a 4 week hiatus in exercise after my skiing injury.  I'm still pretty pleased :o)  The question now is where to go with it all next.  Focus on the final triathlon and the Thames swim training, or on body fat loss.  I don't know and I don't have long to decide, really.  Time for a think!