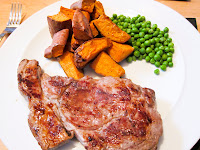 Last night's dinner resulted in slippage again.  750kcals over maintenance through over-doing it beyond what was planned.  Dinner itself was really lovely, clean and though the veal was overcooked, it was pretty nice.  But then I was bad and that ended up in a final snack of buttered toast with Marmite and way over maintenance.  And today I'm not well, so I haven't gone to the gym and that means my allowance for the day is low and I'm hungry and feeling sick at the same time and there was leftover Easter chocolate which has survived the last 2 months in the fridge untouched... 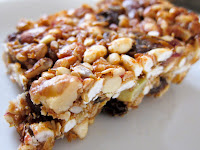 The rest of today's food was less bad, and I finally got a picture of my fruit and nut bars.  The recipe is based on one by BrokenYoYo which I've modified to my own taste after a first run (which I really didn't follow her recipe closely at all anyway) which wasn't as nice as this run.  The first batch didn't have anywhere near enough fruit for my liking, so this run I dropped the amount of puffed rice and really ramped up the fruit and mmmmmdelicious!  They are almost as calorific as the 9 Bars we've bought in the past, but I think my bars are nicer because the 9 Bars don't have fruit in them (though I have done a nut and seed one with no fruit for Mr TOTKat which, apart from the honey disaster, seem to have gone down well.)

Pre-heat oven to 140-150C and line a baking tin with greaseproof paper.

Weigh oats and puffed rice into a bowl.  Weigh and chop fruit and nuts into the bowl and add in the seeds.  Weigh peanut butter and honey into a separate bowl.  Microwave for 30s, stir and microwave for a further 15s.   If it's pretty runny it's ready, if not, another 10s in the microwave.

Mix all of it together thoroughly and dollop into the baking tin. Press down firmly (use the back of a spoon or a bit of greaseproof paper and your hands, which I find much easier).

Bake for 30-40 minutes or until golden. Leave to cool until hard; this will take at least an hour. Then turn out and chop with a sharp knife into portions.
I really love these ones; the honey and peanut butter mix caramelises a little during cooking and tastes almost chocolatey.  Of course, this means I've gone a bit crazy with the next online shop and ordered lots of different dried fruits and nuts for the next lot.
Anyway, I feel rubbish and at the same time extremely lucky that my body appears to be dealing with what I think should be excess kcals in ways other than laying them down as fat at the moment.  I'm not sure why, but it may be that I have gained muscle mass recently (not taken a body fat measurement to find out) and thus my BMR is a bit higher but to be honest I don't think I could have gained enough muscle over the last 2 weeks for it to make an appreciable difference to BMR (I forget the calculation for it at the moment so can't do a finger in the air guess on what kind of difference an extra pound of muscle would make, for example).  In any case, back to the gym tomorrow as long as I'm feeling better.  I've got a long weekend away coming up and I want to make sure I deserve a 4 day break from exercise!  (though there is a pool at the hotel...)