First Triathlon of the year

(of course, I wasn't competing due to busted-butt fallout)

We got up at 5am (unholy, especially so soon after the clocks went forward!) and stuffed in some food; I had Cheerios with milk, something I've not had in months, and Mr TOTKat had a proper brekkie as he was competing.   Drove on out to the place, thinking we'd be really early, only to find that they were serious about the parking around there and most people were already there before 6am registration opening.  It was sodding freezing, to say the least.  We got Mr TOTKat registered and sat down for 2nd breakfast (I had 1/2 a 9 bar, Flax and Mr TOTKat had a peanut butter sandwich), then prepared the transition stuff.  Race numbers are handed out based on your 400m swim times and Mr TOTKat had over-estimated his time by about 30s so he was still quite early in the field, but 30s-worth of competitors too far down the field and ended up having to overtake quite a bit in the pool while I shivered by the side of the pool. 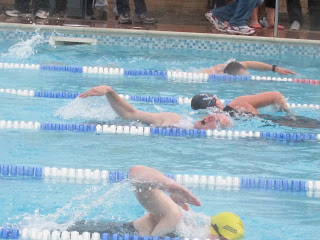 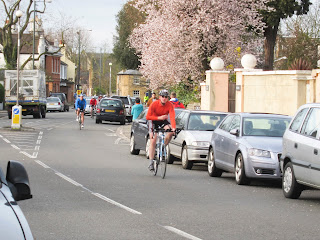 Having overtaken a few more people on the bike route, he was off on the run and lost a few places there, but given he's been recovering from a knee problem since October and not had much running training at all, it was a really good time! 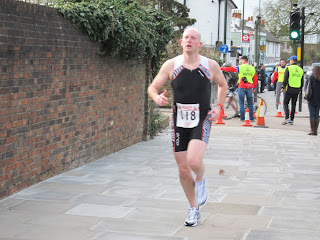 All done and some nice goodies from the race sponsors, including some Thames Turbo beer!  Mr TOTKat finished the last of the tea from the vacuum flask and we headed home to warm up.  Next time, we'll hang around a bit afterwards as there are spot prizes and a bit of social.  It was just too cold for me to wait this time as I'd been standing still a lot in low temperatures (and yes I was wearing a vest, technical mid layer, technical fleece and "fashion" fleece on top and my snow boots and I was -still- cold!).

My go next time and hopefully it'll be less blimmin' freezing!
Posted by TOTKat at 13:15