Having done all of about 3 swims this year so far, and only one of those being in the last fortnight, I swam 5000m today for charity.  Still with the tail end of a chest infection.  And I didn't drown (too much, well of course the guy in front of me for 1/2 the time caused enough wake to force water into my face quite a few times, but I didn't actually drown or anything).  There were three of us sharing a lane; one tiny whippet of a boy who did 2.5km and one of the pool staff members who was also doing 5km with me.  Annoyingly the bloke and I were similarly paced, so we would overtake each other and then whoever was behind would speed up a bit.  The last two times I overtook him (length 128 and length 153) I got mind-bendingly bad cramp in my left ankle, the kind I sometimes get at night that's so bad I end up curled up in a ball in tears with my foot at a mad angle 'cause the joint is so badly spasmed.  And it lasted for 6-8 lengths each time, which was very much not amusing.

I got to length 158 and the lap counter leaned down to say "the next one is your very last one", I was so surprised I squeaked "REALLY!?" (I thought I had 10 more to go at that point) and then zoomed off for the last two lengths and put in my fastest length overall on the last one !

Yes, it wasn't the best time nor one that I feel is representative of what I'm capable of but given the circumstances I think under 2 hours was pretty damned good going.  So I finished in 01:57 and wobbled out of the pool, demanding bacon sarnies :o) and happily accepting my medal:- 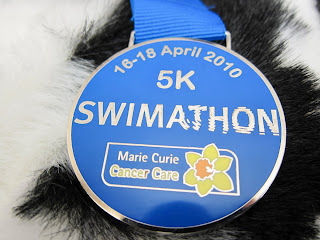 Feeling quite light-headed, but a lot better after a bacon buttie, tea and a huge chocolate chip cookie!
Posted by TOTKat at 13:23