I've got a half day off today to go to some filming in the early evening; yay!  It means some careful planning is required around spacing out meals today so I don't get hungry.  Handily, we buy lots of chicken breasts and roast them up in batches so it's really easy to make salads, sarnies and stuffed pitta breads which is exactly what I'll be doing for later.  It is a lowish fruit and veg day, but I'm usually extremely good with that, so I'm not going to cry over a day that has only just 5 portions :o) 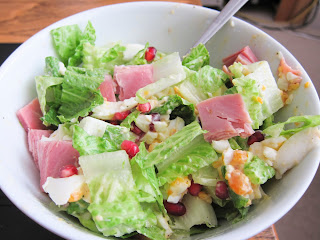 One other new thing is that in an attempt to cut out even more of the more highly processed foods from my diet (though TBH as we make almost every meal and snack from scratch and make sure pre-made stuff, like cereal/nut bars, doesn't have crap in it there aren't many there now - low fat mayonnaise, low fat spread, whey protein powder, the odd slice of supermarket bread, the occasional glug of low fat salad dressing), I'm going to try ditching low fat spreads/margarines in favour of real butter for spreading (and stop being lazy about honey & mustard salad dressing and make it myself instead of reaching for a bottle of pre-made stuff).  I've already made the change a very long time ago when baking breads and I use cold pressed olive oil as a baking fat and now it's time to try changing what I spread on things.  The tricky part will be that I like a thick spread on my toasted bread products and butter is much more calorific than the things I've got used to, so I'll have to be a bit meaner with my spreading and at least initially weigh it all.  And the other tricky bit is storage so that it's neither like rock nor a greasy puddle.