First race of the year

First race of the year - Clapham Common 10K Series Race #1.  With a scheduled start for the race of 10:05, registration opening at 08:45, we decided the time to set off from home was... 08:45.  So we set an alarm for 07:30 to give us plenty of time to have a shower, breakfast, tea, second breakfast and get there in good time to register and queue for the loos before the 10K race start.

I had a bowl of Dorset Cereals - Tasty Toasted Spelt with semi-skimmed milk and then a slice of toasted home-made malt loaf with peanut butter just before we left the house.  It wasn't too cold on the way to Clapham Common, but cool enough for a nice run so that boded well for a good race for me (I really don't like the heat!).

When we got there, Chris was already registered, quaffing a hot coffee (wise move as it was a bit nippy) and a bit amused to have race number "4".  We faffed a bit then registered and... hah!... ended up with race numbers "5" and "6". 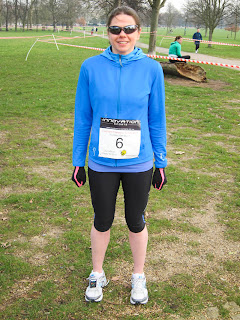 Yes, it was cold enough to need gloves! 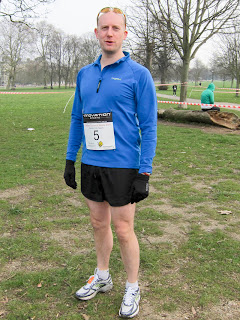 No, we didn't decide to be colour co-ordinated, it just happened that way, OK!

Having dropped our bags off, the final runner (Ibrahim) we were going to meet up with was spotted queueing for registration and the competitiveness got off to a rollocking start.

Group warmup was, as ever at these events, a bit annoying.  Static stretching is not a good idea before running and it really peeves me that the organised warm up staff still encourage people to do it.  *grouch*  Anyhoo... the 2km kiddies had run their race and looked like they'd had fun with a couple of them clocking up times only just over 10 minutes.  The 5km race guys gathered around the start for their 5 minute head-start to do 1 lap while those of us doing 10km waited a bit longer to start our 2 convoluted and wiggly laps of the park.  10am came and went and then we were off!  Mr TOTKat was just in front of me and pulled ahead quite early on, to be swiftly followed by Ibrahim who overtook me around the 1km mark. 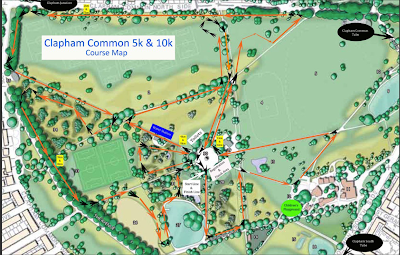 Just around the 1.5km mark I passed a couple of girls encouraging each other on, then at the 2km mark someone had obviously fallen over and was being consoled at the side of the track.  All props to the organisers for going around the course and not only marking it clearly with tape, cones and signs but they'd sprayed orange fluorescent paint on any trip hazards like pot holes, tree roots and the odd manhole cover with a raised or dropped edge.  The course is a mixed surface course between mostly paved and grass with a little bit of gravel towards the end of the laps.  There are a couple of little undulating grassy bits, one of which was really quite muddy.

Towards the end of the first lap, around the 4km mark my left knee started to hurt a bit.  I thought I'd run through it and see if it went away.

Through muttering about people slowing down where the course narrowed to pinch points and the odd person running, walking and being over-taken and then running again and overtaking the "proper runners" back again, I gritted my teeth and kept on through the increasing pain levels.  There was no way I was going to have my first DNF.  No.  Way.

Crossing the finish line for the first time (end of the first lap), I checked my watch.  It was 27:00.  Dead.  This was Not Good.  My target was to get a 10km time in the 55 minute range.  Given a usually faster first 5km than second, it wasn't looking good at all for a 55:xx finish time, especially with my knee talking to me quite loudly already.  The race entertainer/encourager on the PA gave me a shout out as I crossed the line "nice low race number there, well done Kate!" so I gave them a wave and a smile.

Around 6km I realised I'd slowed down a bit as a few people I'd just overtaken had overtaken me back.  Checking my watch my heart rate had dropped a good 6bpm which, at that point in a race, means I'm well off pace.  So I wound up the pace again and ploughed on, my knee getting more and more painful.

Somewhere around 7km I was at the point of vocalising a little on each strike of my left foot.  With the constant thought of "run your own race", "run your own race" I was running through calculations of what my finish time might be if I managed a 6minutes/km pace.  8km came and went and my focus was more and more on finishing, keeping the pace high enough to have a semi-respectable time but low enough not to run the risk of having to pull up before the end.  I then couldn't remember if there was a 9km marker or not, convinced myself that there wasn't one and almost cried when it came as I thought I was closer to the finish than that when it did.  Rounding the final corner, a guy to the left of me groaned loudly, so I said "you can say that again!".  Roughly 100m to go and I tried to lift the pace for the last little bit but there wasn't much I could do with my knee on fire.  With about 20m to go, Chris passed me!  I swore.  Loudly.  Twice.  And threw myself over the line.  Stopped my watch and dared to look at the time.  54:27!!!  Well under target and with a knee that had been increasingly painful for most of the race!

Mr TOTKat and Ibrahim were waiting for us, but only by a couple of minutes... 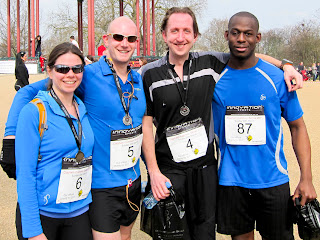 Me, Mr TOTKat, Chris and Ibrahim
Great race.  Really enjoyed it despite the painful knee.  Really enjoyed the pub burger and chips with a lovely 3.4% ale (Adnams Lighthouse) at The Avalon just down the road from the common.

Today, however, my knee still hurts.  Just walking.  So I'm on rest, ice and ibuprofen for a day or two.  On the up side, the official timing results give me a time of 54:22 which is even better than I thought.
Posted by TOTKat at 19:10