I think I rather missed the point.  It was pink and girly, but a bit on the shabby side.  I didn't get around to going to the POM demos and none of the talks that were on while I was there inspired me.  Annoyingly Dame Kelly Holmes was due to speak about 2 hours after I'd left.  That might have been one worth hearing.  Maybe I should have upgraded to a VIP experience thingy, but quite frankly they looked a bit expensive.

To be honest, I'm not entirely sure why Nintendo Cats 'n' Dogs were there... (though I did have a go on the 3DS and was pretty impressed with the 3D effect - it's like those random dot stereograms, but without the effort, and it's an actual picture not dots, and you can adjust the shift to your eyes)

I would like to say thanks to Weight Watchers for the tickets; to be honest, their stand was great, the staff really friendly and helpful and more than happy to feed people lots of their quite nice blueberry muffins.  They were one of the few exhibitors who really should have been at the show and did it well.

I listened to Rosemary Conley trolling out the same old "we were more active in the 1950s.  we used to walk to the shops 4-5 times a week... blah blah...".  The thing is we have moved on and quite frankly I'd rather be doing something more productive or enjoyable than my grandmother was doing at my age.  I managed a good 3-4 minutes of Rosemary before I got fed up and walked off.

Wandering around to get a bit of a feel for the show, I ended up in the spirituality section and freaked out a tiny bit 'cause it was all so very crystal-waving and aura reading.  I get that some people like that stuff, but dammit I'm a scientist/engineer by training and I don't get on with it at all.  So I speeded out of there and over to the 'taste' section to find a load of great products, like '9 Bar' who were doing an offer of a mixed box of 16 bars for only £7.  I wanted to take some home for Mr TOTKat, but they didn't take cash so I had to find a cash machine and save some space in my rucksack for later.

Given that it was way after 14:30 and breakfast was a loooong time ago (and yes, OK, I'd had a couple of plums, a pear, some seeds and a banana since breakfast but...) I really had to eat at this point.  Luckily there is a Crussh in the exhibition centre.  One tuna and bean salad with a strawberry cooler (extra ginger please!) while I watched some dance and I felt a heck of a lot more human.

Back to the 'taste' section and I was happy pottering about, checking out the stands and tasting bits and bobs like the new Nairns 'Oaty Bakes' (the cheesey ones were a bit like Doritos Cheese and I wasn't that keen, the caramelised onion ones were nice so I got a couple of little bags given to me to take away). 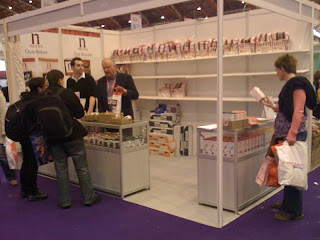 And some 'low fat' cheese from these guys, which was interesting but as rucksack space was at a premium I decided against it. 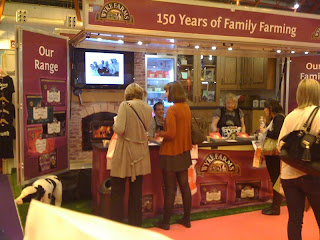 I came across a new range of fruit bars from Tropical Wholefoods - 4 flavours of fruit bars that are really rather tasty, so I bought one of each to take home.  They do loads of other products but these really grabbed me.  I sort of liked the Nakd bars, but these are much nicer in my opinion as they're not trying to be anything else, they're just smooshed fruit.

Then I had a quick look in the 'fitness and yoga' section to find I accidentally subscribed to 'Women's Running' and watched a bit of yoga. 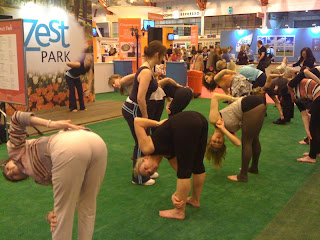 To be honest, the fitness section was pretty disappointing on the whole.  Aside from the lady at the Women's Running stand, who knew her stuff and got my points about not pandering to wussy fluffiness and the fact that women's  physiological differences mean that they can injure in different ways from men due to running, the fitness area was mostly yoga and gentle things.  I'd really love to have seen a serious training shop there (though I did see some Fitness First branded people about the show, I didn't find their stand) but it just doesn't seem to exist in the UK in the same way as the US.


Back to the 'pampering' section near the entrance of the hall and, well, seeing as I was hoiking a large rucksack about I didn't want to stop to have a massage and didn't feel like paying for a manicure or similar would be great idea if I was then going to ruin it cycling home (I don't cycle daintily at all).  It was all a bit focussed on making money rather then show-casing products, although some poor himbo was being exploited by the self-tanning shop:- 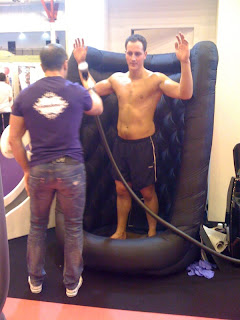 ....which was a pleasant diversion for a few minutes, but given the general meh-ness of it all... well.  Meh.

Almost to spite Ms Conley and her low fat crap, I headed back to a stand in the 'taste' section... 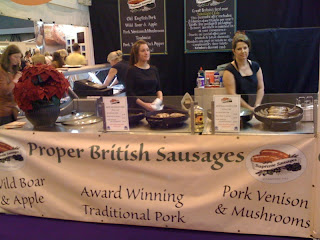 And got me a blimmin' great venison and mushroom sausage in a bun.  Then put far too much English mustard on it and had a real hard time eating it. 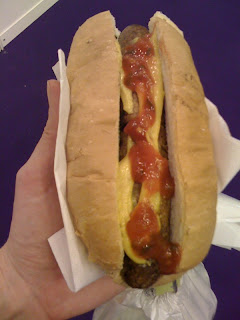 A quick trip back to the 9 Bar stand to pick up a pack to take home and with a runny nose and a -really- heavy rucksack it was time to head home before I made any other rash decisions to try to cram any more in there (I weighed it when I got home - 10.5 kg :o)) and cycled home. 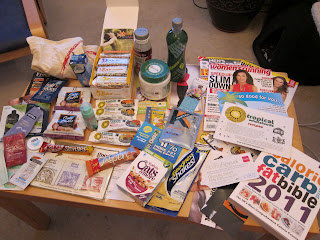 I'll be running a competition to win some of the goodies here, so check back later and see what the goody packs look like.  I also have a few voucher codes which I'll put in a separate post for you all to use.
Posted by TOTKat at 19:59