On my way in to work this morning, I was about 12 minutes into my ride, maybe 15 and was flying up CS7 alongside the traffic jam of cars.  I was just at the junction of Oldridge Road and Balham High Road with a large van stationary just in front to the right of me, when a car going the other way suddenly appeared across the front of me, turning right into Oldridge Road.  I was doing about 25kph, maybe a bit more; the car was probably doing around 10kph.  I only found out about it when my front wheel was taken out by the front of the car and a second or so later I felt myself land and the back of my head hit the road. 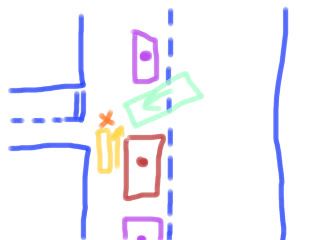 I screamed.  For the first time in my entire life, I screamed.  Twice.  Maybe three times.  My eyes were shut and I didn't dare open them.  There were people around me asking me to open my eyes, so I did.  I could hear a female voice saying "I'm sorry, I'm so sorry.  Is she OK?" over and over.  My knees hurt, my head felt a bit funny and I didn't want to move.  They were all asking me was I OK, then one guy seemed to have some medical training and asked me my name, looked at my eyes, checked my grip, spine, hips and shoulders and then decided it was OK to get me moved.  I was keen to get out of the way of the traffic, but people kept telling me not to worry about it.

My bike was moved for me, I have no idea where it ended up first of all; I think it went over the car.  The car that hit me was behind me, so I must have gone right over the bonnet.  My shoes unclipped totally from the pedals pretty much immediately the impact happened, which is a relief.  With all the adrenaline bubbling about, I told everyone I was fine and totally intended to carry on in to work and that no, I didn't need any of the three ambulances that had been called for me.  No really, I'm fine.  The guy who checked my back and brain were mostly OK advised me to get me bike checked out before riding it again in case the headset was damaged which I thought, mm I'll do that on the way home tonight.

The woman that hit me took me for a cup of tea and I really did intend just to get on my bike and carry on in to work.  As we got up to leave the cafe, I looked down at my right knee and saw two huge lumps on it as well as the graze.  The woman was advising me to go home and have a hot bath, which was sounding more and more inviting by the minute.  My neck was starting to get sore and my jaw hurt as I opened it, so I thought I'll just check my bike in to the bike shop over the road for a check-over and head to a walk-in clinic to get myself checked over.

As I walked my bike to wait for the bike shop to open, I noticed something catching every revolution of the wheels.  So I lifted up the back and spun the back wheel - tiiiiiiiny bit wobbly but not catching on the brakes.  Did the same with the front... not so good.  Bent.  And looking at the right side of the front forks for the first time, I saw that they were broken.  Feeling a bit sick and headachey by this point I decided to go to St. Georges A&E to get properly checked out.

Then the shock finally started to wear off a bit and I was in floods of tears all the way to the hospital.  Snotty and sniffling, tears streaking down my cheeks.  By this point I couldn't turn my head to check for traffic coming in roads to the right of me, so had to turn my whole body to do that.

I locked my bike up outside the hospital and went in to A&E to register.  Only to get totally told off by the triage nurse for not coming in an ambulance, bumped to the front of the queue and told I was being treated as 'trauma' as I -should- have come in an ambulance especially given I went over the bonnet of the car.  I'm terrible.  I don't like making a fuss.  I don't like going to the doctor unless something is pretty much hanging off.  I really need to get over that.  That said, while I was in A & E waiting to be seen by a doctor, I heard a call come in for another accident - 20 minutes away in the ambulance; pedestrian vs. cyclist at 30mph.  Brain bleeding, BP very high, other internal injuries, suspected probably won't survive the ambulance journey.  I don't know if that was the pedestrian or the cyclist, but I'd suspect the pedestrian at that speed.  I didn't find out in the end.

At this point, I felt very lucky.

The doctor came and... long story short, my BP and heart rate were very high (I still had my heart rate monitor on and it didn't drop below 100 even after sitting down for 20 minutes).  Spine, hips, shoulders and brain checked out OK.  Knees and calves just badly bruised, scraped and a bit lumpy.  Neck and jaw minor injuries that would need ice packs for a few days and Ibuprofen to treat.  No work for at least 2 days, no gym or cycling for 2 weeks.  Immediate treatment with diclofenac (and some bread and butter and tea to help make it easier on the stomach) and 2 hours observation before being discharged with a letter sent to my GP detailing the injuries.

Annoyingly, my camera is out of battery and I'm too tired/sore to go find the charger, so here's a list of the injuries:-
My bicycle helmet - bent plastic and compressed polystyrene at the middle on the back and cracked polystyrene right through on the back, left side (where it hit the road).  That has to be replaced.  Anybody that ever tells me that people shouldn't wear cycling helmets will get an unpleasant response from me.  I always thought it's better to wear one than not and now... well, given how hard my head hit the road I'm pretty sure I wouldn't be sitting here back at home by now if I hadn't been wearing a helmet.  I'm pretty sure I would have been in an ambulance earlier and not telling people I was fine.  I'm pretty sure I'd have more than a slightly sore bit on the back of my head.

I need to go and find Ibuprofen now.  And sort out more ice for the rest of the day.  Everything aches.  My neck and shoulders hurt a lot unless I slouch in a bad way and I'm feeling washed out and tired.  I've already eaten 4 slices of bread (two in the hospital with butter on and two toasted with Marmite when I got home) 'cause I'm starving hungry but I don't care what I eat today as long as I do eat.   I want to nap, but that's a bad idea unsupervised at the moment, so I'll try not to do that for at least a few more hours if not normal bed-time.

Time to count my blessings and drink tea with kittens cuddled up.
Posted by TOTKat at 13:43