2011 was the year of too many races randomly sprinkled through the year, no actual training, too much annoying knee injury, but lots of fun:- 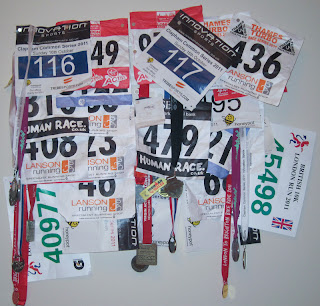 (our wall of races, needs to come down now)

2012 looks like this:-
NO ENTERING ANY MORE RACES BEFORE THE END OF SEPTEMBER! (Long running events, sportives and century rides are allowed -if- they fit with my training schedule and are treated as training sessions, but otherwise, NO!)