And the manufacturers claim that when you drink it, it could cause you to burn up to 200-odd calories without lifting a finger. 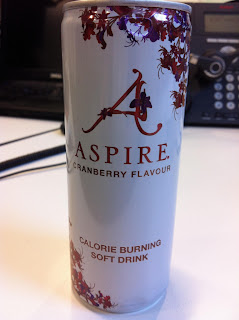 The idea is that there are ingredients in it that have a high metabolic cost to process. It's the same idea as Weight Watchers focused on in their new Pro Points scheme.  Everything you eat has a metabolic cost.  Some things are simpler/easier to convert into energy and building blocks than others; some things require more energy spent by your systems to perform that conversion than others.  And there's been a (fairly limited and not statistically significant) study carried out by Leeds Metropolitan University which seems to show that resting energy expenditure could well be appreciably elevated  for a period of time due to drinking Aspire.

I'm not the biggest fan of cranberry, but the taste is actually quite pleasant.  This is mostly because it's not overly sweet.  There's a hint of the "seltzer" to it and I guess that's down to the added vitamins etc.  As a soft drink goes, I think it's one I'd think about buying to keep the variety up (especially while I'm Not Drinking).  And with talk of there being a new flavour launched in March, it's a real candidate to add into the variety rotation of drinkies to stave off the taste boredom.

If there really is an effect, it might be a nice little helping hand to general calorie expenditure, but even if not it's quite a nice drink.
Posted by TOTKat at 06:30