I love tea.  Really really love it.  It's the first thing that passes my lips in the morning, it makes me feel comforted and soothed, to me it's (to use a revolting cliché) a hug in a mug.  And I drink quite a lot of it.  Anything from 3-4 mugs a day to sometimes clear of 10. 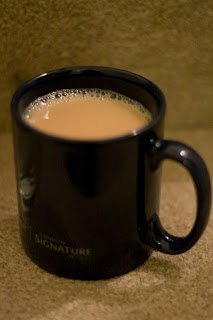 There's never been a reason for me to give up tea.  I won't say caffeine here because the only significant source of caffeine I take in is tea.  I don't drink colas and very rarely have coffee (not a great fan of the taste, though the smell can be glorious).  Why should I give up tea?  What measurable detrimental effect does it have on me, vs. the enjoyment I get from drinking it?  I actually have no idea.

I accidentally gave up tea once, when I started at university.  Moving from an environment where tea was drunk several times a day, by the pot, at home to one where it wasn't around and available and quite often made by someone else, I had to go out of my way to have tea.  I'd bought bags and milk and there was a kettle in the halls kitchen, but I just didn't get around to making any.  That lasted for about a week, over which I had increasing headaches, crankiness and crabbiness to the point where I was pretty much a total bitch to everyone.  Then I had a cup of tea at the weekend and it all got better.  The penny dropped and I got back to drinking tea several times a day.

So, back to the detrimental effects... I don't know that I'm suffering any because I've never known any differently.  You know when you've been ill for a few days and then you get better and you realise how rotten you'd been feeling by how great you feel now?  Well, that could be it.  Maybe I could feel better than I do now.  I'm not saying I don't feel good, but what if it might be that I could feel great?  Wouldn't that be something?  Something worth a few weeks (at least) off tea to find out?
Posted by TOTKat at 12:07

Email ThisBlogThis!Share to TwitterShare to FacebookShare to Pinterest
Labels: caffeine, give up, tea