Things I need to think about

So my trainer suggested that maybe I'd like to have one session a week with him instead of just one a month, so we can step it up a bit and really get working.  I know he's on commission so he needs to drum up business, but I do enjoy the sessions and it might be good in the quiet period between triathlon numbers 3 and 4 where there's a 2 month gap and only the Thames swim in there.  It'd be nice to see if I can really get my body fat % down and get pretty strong while I'm not worrying about cardio training and tapering a week before the race.  So, I'll think about it.  It'll be expensive, but it is a priority for me, so it beats stuff like buying shoes and dresses.

The training session today showed up my weak left arm again.  I'm going to try to work on it a bit, but at the moment it is significantly weaker than my left arm and some movements are almost impossible to do many reps with any significant weight at all.  As it was a new routine session, it was lower intensity than a full run through of the routine will be; stops for form tweaking, discussion etc.

I felt really good this afternoon and was tempted to have a bit of a run when I got home, but decided against it.  It's not in the plan for this week and I'd rather not over do it (for me; yes I know plenty of people do loads more exercise than me and they don't keel over!).

Dinner was beef chilli with giant couscous, peas and sweetcorn; one of my favourites and I don't often get to have giant couscous (which I love!):- 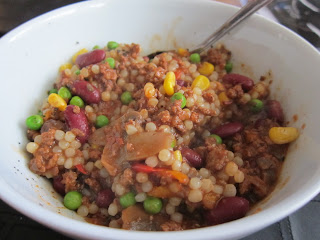