Had a fabulous ride this morning; 21km with a few stops for going the wrong way and needing to re-set to the right route.  I totally made mincemeat of the South-bound approach to Wimbledon Hill, the one I used to run up when I was learning to run.  Steeper than coming at it from Wimbledon Broadway on the other side and with speed bumps for added fun.  I needed to turn right at the roundabout at the top so the last 100m I was slap bang in the middle of the road to be in the right position to turn right and to get in between the speed bumps. Obviously, as I was going up a hill, I wasn't all that quick.  And clearly, as the white van made pointed out by yelling at me, I should have "pull(ed) over! *incoherent unintelligible words*".  Er right then.  Bikes aren't road users and shouldn't position themselves correctly for the action they are about to take.  How about; fuck off, you twat, and go read the highway code, eh?  Anyhoo, I was utterly unfazed at the time 'cause I'd just thrashed the hill and felt great :o)

676kcals of lovely cycling and I actually wanted to go lots further, but had reached home and time for a re-fuel/re-hydrate. 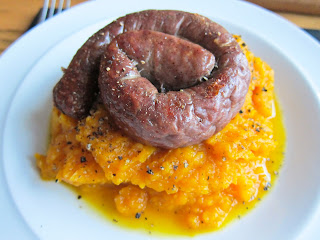