Won't be making that again

Second run through the new weights routine today and this time I had my HRM. Very good burn and amazingly high heart rate during the squat, clean and presses and Mike caught up with me during those, so that was cool. Not the longest routine and the cool down is shorter but the burn is about the same in total.

I am quite impressed with the Powerplates for stretching afterwards; it really seems to make quite a difference. But. It gives me terrible cramp in my feet when I'm doing the quad stretches. Not sure what to do about that. I shall ask Mike about it at my next session.

Dinner was horrible. It was an experiment and I can report that it gave a negative result. Yick. It was just waaaaay too dry. 6 tbsps egg white [was supposed to be 3, but I forgot I froze it in 6s], 1 whole egg, 1 scoop natural, black pepper:- 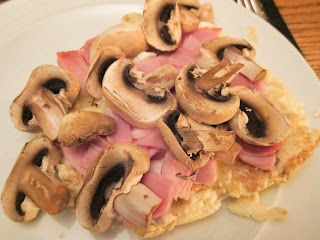 Even spread with Philadelphia and a few chunks of Pie D'Angeloys as well as the mushrooms and ham, it was dry as all hell and just unpleasant. So. I won't be making that again. Perhaps less egg white, or topped with a generous smear of yogurt and it might be nice. But this just wasn't. Nope. Very unimpressed.