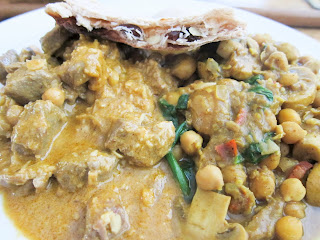 Ohyes.  Curry.  1151kcal dinner :o)  Home made lamb korma (with a buttload of chilli in it) and curried vegetables (chick peas, spinach and mushrooms) with home made peshwari naan (with flaked almonds, raisins and dessicated coconut).  My belly is sooooo full!  The only improvement would have been had I used tomatoes in the vegetable curry.  The two curries were very differently flavoured but could have done with a bit of tanginess in one of them.  Just what I needed after a pretty good gym session today of my current routine with added cycle there and back, pressups (3x10) and negative motion pull-ups (3x5x4s).

Still under maintenance for the day and happy with how the week has gone.  I'll be cruising for 0.5-1.0lbs fat lost, but we'll see when I do the body-fat measurement tomorrow.

If anyone wants recipes, just shout!  (though the naan needs refining as the filling was a bit dry)