Not honestly feeling up to a long post, but we'll see how it goes. 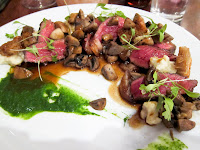 We started off on Friday afternoon going for lunch at a surprisingly great restaurant in Victoria called Bumbles where I ordered steak with mushrooms and cauliflower for lunch, after a smoked salmon starter which was so cute and sweet but I forgot to take a photo.  Given that we'd be having sarnies for dinner on the plane, I thought it was best to get something solid down me for lunch.  And ohboy was it lovely!  It wasn't huge.  It wasn't cooked in lots of fat.  It was cooked exactly as I'd asked; blue :o)  And it tasted absolutely lovely!   We shared a bottle of wine (of which I had about 2/5ths) and that's where I think the weekend started to go wrong... 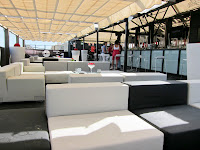 One of the things we'd been wondering about, since I booked this weekend away, was how rich people get to Valencia.  Only EasyJet seem to fly there from anywhere sensible in the UK and they have just one class on their flights.  We'll our question was answered on the flight out as in the "speedy boarding" queue was one Eddie Jordan.  So.  They fly EasyJet too.

Fast forward... taxi from Valencia airport to the hotel along the scrubby marshland strip that seems to define the boundary between the older part of the city and the new, re-developed part and the port and marina.  Swift glass or two of beer in the bar, shared a toasted sandwich and off to bed. 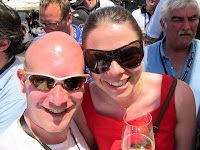 Saturday we walked to the Marina to the VIP terrace, which was -amazing-.  Right on the chicane, on a rooftop with awnings, 6 bars, lots of different seating areas etc.  Bar and food open from 11am to 6pm Friday to Sunday.  Saturday, we hid under the awnings from the sun, watched some cars go around (with ear-plugs in 'cause it's f'ing loud!) for free practice, GP2, GP3 and Porsche Cup, drank lots of wine and water and ate lots of nibbles.  Went back to the hotel for a nap at around 4pm and woke up at 7pm!  The guide book had some recommendations for dinner so we walked down to the amazing new developments of the Oceanographic (aquarium) and Science and Arts Park... 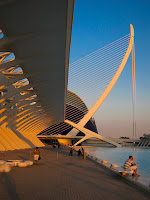 There was apparently the nicest bar in Valencia under one of the walkways, but we couldn't find it.  Then we hunted down the restaurant in the aquarium after a lot more walking than I'd bargained for (and as such was wearing utterly inappropriate shoes), but... despite both the guide book and the city guide published for the Grand Prix this year saying the restaurant in there was open for dinner we were shooed away by a security guard who said the place was all closed.

Thankfully there was a backup plan of an Italian place back across the bridge, near the hotel and that was open and nice and had people who were lovely working there.  I had a lovely, tiny but rich, portion of ravioli with mushrooms and truffles in a cream sauce which filled me right up.  Then, as the guide book said the place we renowned for its desserts, we had to have one and I had the lightest, darkest, tangiest chocolate mousse ever. 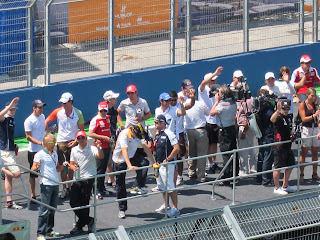 (Parade lap of all of the drivers on the F1 bus) 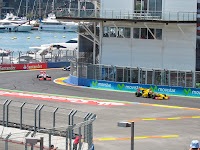 Sunday we walked back to the terrace and started again.  Watched and listened to the cars go 'round, drank and ate the nibbles and stayed until 6pm when the lounge party closed.  Then back to the hotel for a little nap before we'd planned to go back to the terrace for the night party.  However, we woke up at around 9.30pm and I felt -awful-.  Absolutely dreadful.  Both instantly drunk and hung-over at the same time.  So we hauled our dressed-up asses down in the hotel lift and across the road to the restaurant there, where the menu was incredibly badly translated and despite some lovely bread nibbles the food was horrible and vastly over-priced, and the staff were almost horrified that we only wanted water to drink.  45 minutes after heading out, we were back in the hotel, crashing into bed. 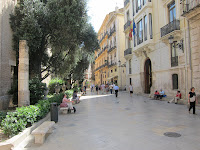 Mr TOTKat had intended to buy me lunch at a lovely restaurant in one of the new hotels on the Monday, but despite being told it opened at 2pm when we went back to the hotel at 2pm we were then told it was closed on Mondays.  *sigh*  So we headed into the old part of the city to find another place in the guide book which was -also closed-!  At this point we'd had enough, so headed into the nearest cafe and had a really nice lunch.  To be honest, it was probably a good thing that the nice restaurant in the hotel was closed as I was feeling pretty horrible still/again and needed a couple of hours of sitting quietly in the shade, sipping water and moaning a bit to get anywhere near the point I felt able to do anything.

On the flight back we were as lucky as on the way out and got exit row seats, then co-incided with lots of handy transport options culminating in getting the last tram from East Croydon back home.
Posted by TOTKat at 22:19