Over the top and taking it easy 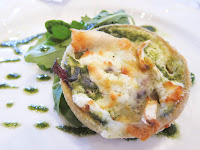 Having had a really hard and tiring week, including sticking to 500kcals under maintenance every day on average, yesterday's marriage blessing day resulted in going well over and feeling rough as hell today.  It was a reasonably early start and a longish day with only one really bad food choice towards the end of the day when we got to the B&B and I had a croissant with ham and lots of cheese.  Very little fruit and veg during the day as well.  The food at the celebrations was lovely and the wine was really nice... 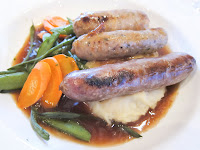 The sausages were three different flavours which, I think, were; pork and apple, Lincolnshire, and pure pork.  They were certainly really tasty and the white wine on offer was perfectly able to stand up to the flavours of the sausages, which was really nice. 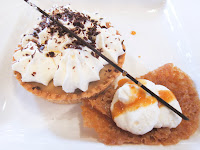 The ceremony in the morning was in a lovely old church, built in 1215 and was the family church of the Nightingale family.  In the church itself there's a plaque dedicated to Florence Nightingale and the family tomb in the graveyard is where Florence was buried in 1910.  Lots of history and some amazing original friezes on the church walls inside as well as an ancient rifle attached to one of the beams over the choir section of the church which was placed there after it played a part in the accidental shooting of a servant girl in one of the local manor houses.

We actually came home last night rather than stay at the B&B.  Which resulted in me having toast and boiled eggs with tea just before bed.  I'm really not very with it right now and could do with some serious napping this afternoon.  Given that it's the Thames swim next weekend, I have to wind it right back this week and probably aim to go onto maintenance and forget about any body fat loss goals.  I can't do a body fat measurement today seeing as I had some wine yesterday and my hydration levels will be all over the place for at least 24 hours.  More than anything, I need the sleep and not to be trashing my legs completely - I also have a strain in the right side of my groin which I want to be gone by the weekend.  So.  Perhaps only gymming this week, maybe one or two cycling days if any, I don't know.  Problem is... cycling is nicer and faster than going in by tube :o/
Posted by TOTKat at 13:32