Back and currying it up 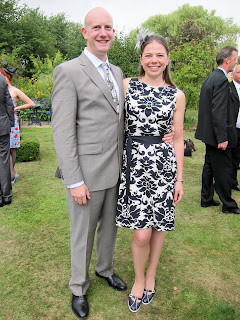 Not the best day on Thursday, had breakfast at 8am - 2 slices of toast and scrambled egg - and then nothing until very very late lunch at half past 3. Suffice to say, I was starving by then and the 3 small glasses of white wine sat badly enough before the 2 glasses of red and the 1 of champagne. I was as sick as a dog and fell asleep at 6pm until I was woken at 9pm. I just can't do that. Yes I drank quite a bit but it shouldn't have made me sick, not like that. Lack of food made a heck of a difference and I felt like shite. The barbecue lunch the next day made a huuuuge difference to the state of my well-being, despite me being a bit of a pig and having 1 pork steak in a bun, followed by 2 beef burgers in buns. With a little greenery and some ketchup. And then some wedding cake. The barbecue made me feel so much better.

However, I wasn't happy with any of the photos except this one.  Major double-chins and flabby arms going on, so really quite unimpressed with that.

Anyway. We're home now and gymmed this morning, which was nice. I showed off a bit with my press-ups on medicine balls. I really fancied curry tonight, so dinner is a tad experimental, but basically a chicken Phaal and aloo gobi. And, well, the Phaal is a teeeensy bit hot. I based it on a Patak's recipe, but obviously made the paste myself from scratch as it's much more fun that way (though it meant guessing a bit from the ingredients on their web site which don't tell you know much of everything is in the paste). 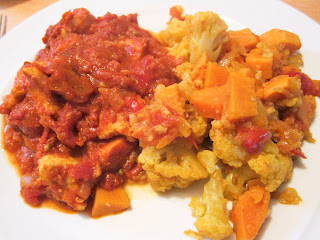