I've been sort of wanting a slow cooker for quite a while and the opportunity to have one arose a little while ago.  Well, what I've now got isn't just a slow cooker... it can bake, steam, fry, slow-cook or boil.  Quite the little versatile appliance.

It's the JML Star Chef and it arrived at work, while I was on holiday last week.  Of course, I cycled in to work yesterday so couldn't get it home on my bike as it's a little bit big for a rucksack.  I didn't cycle today so I could get it home and play as soon as possible.  Of course, I'd not be able to do any slow cooking today as there just wouldn't be enough time so I got out some salmon fillets from the freezer this morning. 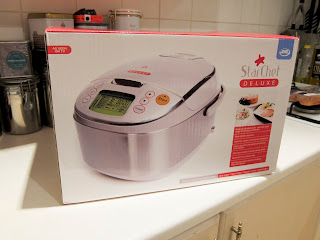 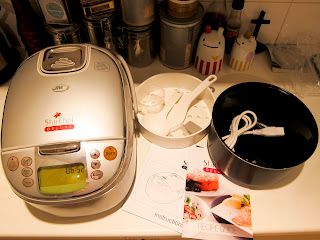 In the box is: the appliance, the power cord, a cooking pot, a steaming basket, measuring cup, stirring paddle, spoon, drip tray and spoon holder.  Sadly, the measuring cup got cracked in transit, but... I have loads of those so I don't mind really. 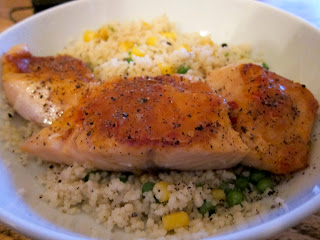 Unboxed, plugged in and the time set on the clock and I got to work with a salmon fillet for my dinner.  Set the Star Chef to fry fish for 10 minutes, plopped in the salmon and left the lid open so I could watch.  2 minutes in and it wasn't getting very hot so I thought maybe it'd be happier with the lid closed.  Yep!  I left it to its own devices until it'd had the first 5 minutes and came back to a sizzling salmon fillet which I flipped over and closed the lid on again.  At 10 minutes, there was a polite beeping and the Star Chef set itself to "keep warm" mode.  Out came a really nice looking fried salmon fillet (which I then broke getting out of the pot with the wrong implement *cough*)


Pretty darned good, I think.  Plus, and here's the huuuuuuuuge bonus for me, the house doesn't reek of salmon AND the smoke alarm didn't go off!  (it's apparently impossible to cook even mediumly brown toast in our kitchen without setting off the smoke alarm in the hall as it's so bloody over-sensitive)

Anyhoo.  First impression is "woo!".  MUCH more detailed thoughts in a later post.  And many more modes and recipes to try and have fun with :o)
Posted by TOTKat at 21:22