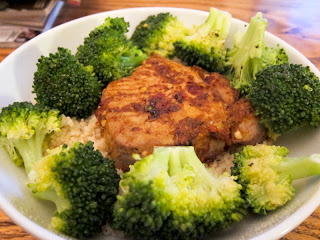 Most of the time I don't cook from recipes, just from what I think will make a nice combination.  And today was no exception.  The target today was tuna and I decided that, as curries smell so good when you put the paste into the pan, why not use that method to coat the tuna?  So I grabbed the nutmeg grater and set to, grating lime zest (one whole lime), garlic (two fat cloves), a chilli and adding soy sauce (10ml), olive oil (10ml) and lime juice (15ml) into the mush to spread over the tuna steaks.  Of course, I grated one of my knuckles and bled a bit (What do you -do- with those bits of skin that are hanging off when that sort of things happen?  Do you leave them where they are or pull them off?), so maybe I should remember to use the corncob holder to skewer things to hold them next time.  *sigh*  Annoyingly, the gorgeously strong garlic died off a bit as a flavour when the mix was cooked, but otherwise it turned out pretty tasty.  Perhaps an improvement would have been to let the tuna rest in the mix for an hour or so before cooking, instead of just smearing it on immediately before cooking.  I may well find out later as I've not yet cooked it, but I've smeared Mr TOTKat's steak with the mix for when he gets home later.

Today also saw the first go at steaming veg in the Star Chef.  Which also turned out well.  I've never steamed anything before, so I wasn't sure what the results might be like, but I've ended up with slightly al dente, flavoursome broccoli this time, so I think I've probably done it right.

All in all, a pretty nice dinner I thought.  Now I just need to stay away from the wine that's lying around... it's getting pretty tempting.
Posted by TOTKat at 20:12