Weight Watchers has never featured on my radar.  Not even when I was losing weight.  Mostly because I hated the idea of meetings and weigh-ins.  I'm a loner when it comes to doing things for myself, I don't want help and not just because I'm proud but because I'm difficult and annoying and fussy.  So, Weight Watchers wasn't something I was ever going to join.

The other problem with Weight Watchers was the proprietary points system that seemed to me to be very restrictive; if it wasn't in the little look-up table, you pretty much couldn't have it as you'd have no idea how many points it would translate to.  Urgh!  Where's my control?  Now, not knowing anything about the advances in Weight Watchers to date I may be behind the times with the look-ups and given what I have in my Pro Points goody bag, I think there may have been an advance there with the Points calculator which allowed you to enter bits of information from the nutritional information of a food and it worked out the points from there.

So, now for the Pro Points system and the changes to the Weight Watchers plan.  This is pretty big, to be honest.  Calories are out of the window.  Points are still in, but in a very different way.  It'll be coming to Weight Watchers meetings from 7th November and the old points system will be no more. 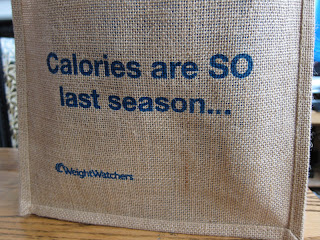 Using 10 years of scientific research into nutrition, Weight Watchers have come up with an impressive new plan which stops using the 100 year old blunt instrument of calories and starts to do something a bit more clever.  It's been tested for over 2 years, including two randomised clinical trails, the results of which were not only general weight loss as expected but there were also improvements in health risk indicators like blood cholesterol.  And I was really glad that when I asked the question "how did the rate of weight loss compare with the old Points system?", the answer that came back was that that comparison was not done at all.  It was never going to be about losing weight faster or more efficiently, it was about doing it in a more informed, flexible and educated way with the emphasis being on foods that are cleaner/less processed and will help to keep people on the wagon as they'll not really get hungry as easily by making food choices that are based not purely on calorie content which can lead to blood sugar spikes and crashes.

It's the biggest Weight Watchers innovation in 15 years and 3 years in the making.  A new weight loss plan that is based on the available energy from food rather than the raw energy in food.  Taking into account the "conversion cost" of macro-nutrient types, the new Pro Points system not only makes more sense in terms of the energy a body is taking in, it also considers the satiety of foods as well.  While the counting of points isn't a departure from the old points system, the introduction of a weekly allowance is new.  As before you get a daily allowance based on weight, age and sex but in addition to that, there's a weekly "back pocket" allowance on top of that which you can dip into daily or save it all up for a splurge on one day if you want to.  The little calculator keeps track of your points on a daily and weekly basis and when you've got to goal you can flip the setting from "loss" to "maintenance" and still use it to help you with the initial bit of maintenance as you ease into your new points allowance, or longer term if you need it. 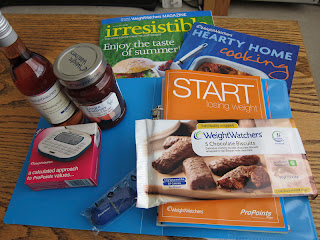 All of these changes add up to nudging people towards food choices that lead to feeling fuller for longer.  Marks and Spencer have already been using the macro-nutrient approach for their "Fuller For Longer" range, concentrating on protein and fibre in the recipes as they are harder to process - have a higher "conversion cost" - which leads to longer term satiety.  And the idea is that the small changes in food choices you make during the weight loss phase leads to longer term better choices after reaching your goal.  I'd love to say "it's all about informed choices" but then, isn't that always what a proper weight management diet was always about?

It's looking really quite good for getting people to lean towards cleaner foods.  I think that processed foods will generally score high on the Pro Points scale as they tend to have higher proportions of carbohydrate and fat vs protein and fibre.  And although almost all fruit and vegetables are still rated zero on the points system and there is definitely energy to be derived from those, it's still going to help with weight loss, maintenance and healthier choices in the long term.  It's also looking good for starting to get people away from thinking purely in terms of calories which has been at the forefront of bad "diet" foods; foods where the reduction of fat (usually) or carbohydrate (on occasion) is at the cost of the natural state of the ingredients.  And the cool thing for me was the little Pro Points calculator that you just have to enter the protein, fat, carbohydrate and fibre off the label of a food packet and it tells you the points in that food.  The only thing I didn't find out about was the points relating to alcohol - it has zero nutritional value, so it'll be good to know about that bit.

For a mass-market weight loss system, Pro Points really does look like quite a good choice.  It's still not faddy; no only eating green foods on a Tuesday or no carbohydrate after 6pm etc.  It's getting away from calories, which have grated for me for a while now as I'd been thinking about the fact that some guy burning a peanut to heat up some water really bears no relation to how my body processes a peanut.  It's helping lead people to informed choice - helping with leaning towards cleaner food, choosing less processed food in the understanding of satiety and nutritional value.  It's helping change habits for life - more clever choices with food but realistic ones for long term maintenance.  It'll be interesting to see the impact of this on supermarkets and other food industry companies.  Marks and Spencer have already dipped a toe into the land of macro-nutrient based weight management products, let's see what the others do.
Posted by TOTKat at 17:13