And on the 7th day

Well, OK, it's Thursday but it's my rest day. So, I am actually resting. I think part of the reason my thigh gave out last week was because I went at it hard, five days in a row as well as not warming up properly. So, today's lunching and munching had to be a bit more frugal due to the lack of burn. That said, the banana and raisin malt loaf I made at the weekend was sooooo nice, that I've made another one now that the first one is down to the last crust :o)

Lunch was a bit experimental today; I got some Edamame beans in the shopping (I love them) and was going to have them with spinach, sweet pepper, walnuts and goats cheese but there was lettuce that needed finishing and it turns out that the Edamame beans are proteiney and fatty enough that I didn't need the walnuts, so I ended up with this instead:- 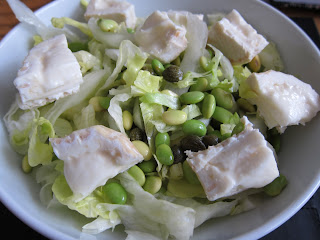 Beef chilli for dinner. Nomsicles, but not all that photogenic, plus you've seen it before!

And for those of you who have been asking for the malt loaf recipe, here it is again (bread machine recipe, but I'm sure it'd work as a manual one with a bit of working out timings):-

Stick it all in the bread maker (making sure the yeast goes in first and the wet ingredients last so that the yeast is protected from the wet ingredients by the flour etc. at the start), except the dried fruit which goes in the nut dispenser (or wait for the nut/raisin beep) and set it to "raisin bake" mode or equivalent. You can add chopped banana in with the dried fruit (I added 2 ripe bananas to mine to end up with a 1/10th loaf slice being 220kcals :o)) and it seems to work quite well, though be careful the dispenser flap doesn't get all sticky and stuck closed, thus not dropping in the fruit into the mix (voice of experience!). 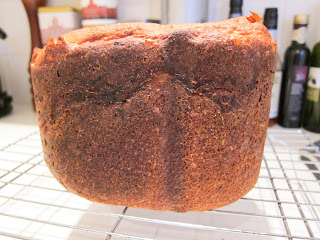 This one is a lot fluffier, bigger and flatter-topped than the last, perhaps fresher yeast and a lack of me hurriedly mixing in the fruit with a wooden spoon a few minutes into the bake cycle 'cause the nut dispenser door had got stuck shut. *ahem*

Exercise - rest day (bit of foam rolling and a few planks & pressups, nothing worth logging)


Yes the %s don't add up to 100%. This is because there is port in the chilli recipe and even though the alcohol is boiled off, WLR doesn't know that's what happens when you cook alcohol so the alcohol is still registered in the nutrition split. Annoying, but there you go.
Posted by TOTKat at 11:56