How Not To Get Fat 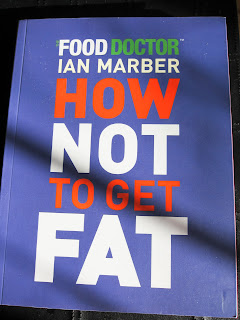 Mostly, I liked it.

It starts off with an easy-to-digest, pop science explanation of how our bodies deal with food, the chemical and biological interactions. Then explains the problems with "diet"s and the fact that an eating regime is for life, not just to drop a few pounds only to put more back on again because you revert to how you were eating before. There are sections on psychological aspects, the effect of alcohol, nicotine and caffeine and finally a bit of a bashing of exercise. The bashing is pretty much in the same vein as the "diet" bashing in that exercising hard for a few weeks to lose a few pounts, then stopping, it just as bad for your metabolism as fasting for a few weeks and then going back to "eating normally".

Mostly, it states what seems to be obvious about eating right all of the time (and exercise as much as is sustainable and keep it up). But the scaremongering around messing up your metabolism if you've ever been fat and dieted or exercised hard is a bit much at times. Of course, if you diet hard, then put the weight back on (and more) then diet hard again and repeat, your body (and mind) is going to be very confused.

Generally, I'd recommend it for anyone who is either young and worried about gaining weight later in life; or anyone who is overweight and wants to permanently keep weight off after losing it; or anyone who has already lost weight and wants to maintain that healthier weight for the rest of their life. I'd also recommend it for just anyone really. Unless you've really already got a handle on eating frequently and moderately with a focus on unprocessed and unrefined foods.
Posted by TOTKat at 13:53

Email ThisBlogThis!Share to TwitterShare to FacebookShare to Pinterest
Labels: book, exercise, food, How Not To Get Fat, nutrition, review