We set off a tiny bit late to get to the start of The Hell of The Ashdown this morning, but thanks to it being 8am on a Sunday, there was no traffic at all and we got there with plenty of time. The organisation of the event is such that there are never hundreds of people milling about, though there are one thousand places allocated between the 50km and 100km rides. I waved Mr TOTKat goodbye at around 09:20 and headed back to the car to get some change for a cup of tea. 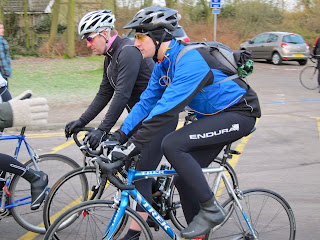 At around 11am, after hunkering down under a blanket in the car and reading for a bit, I went for a 5km run which wasn't painful, but felt rubbish; sluggish legs and generally didn't feel great. 28 minutes meant that it was indeed pretty slow at 9.9kph (I usually do 5km at around 10.6kph or faster). A quick protein shake and more book under a blanket after that (I had on a thermal base layer, a technical long-sleeved top, a long-sleeved cycling top and a fleecy jacket and long running tights and jogging bottoms on the bottom half and I was still cold even with a fleecy blanket on top of that) in the car 'cause it was warmer than the ride HQ. A couple of teas and salad after that and I was worried that I'd not had a progress call, but as I had very little battery life left on the iPhone (thanks to using it as a navigation aid to get there) and didn't want to use it up. 5 hours after the start and I was extreeeeeemely cold and more than a bit worried and was just tucking into my egg mayonnaise when I got a text message... then two voicemails from 25 minutes earlier! So I called and got through to a very weary, but slightly perking up Mr TOTKat who'd "bonk"ed quite a bit but was thankfully right around the corner from a feeding station and had munched and perked up a bit since the first plaintive voicemail. I was so relieved to hear he was OK and "only" 10 or so miles away, so about an hour or so and he'd be done.

So, I finished my book, went for another tea and waited at the finish line for Mr TOTKat to come over that last hill. Admittedly, I was a bit premature in deciding to stand outside and ended up being there for half an hour and chatting to a lady who was worried about her son and husband who'd not finished yet either.

It was really great to see Mr TOTKat cresting that last hill and crossing the finish line; 108.8km and 5000 feet of climb is no mean feat at all and I'm very proud of him for meeting the challenge! And I was more than a little bit cold by that point, though the time had flown while I was reading. We adjourned for tea and cookie then headed home for hot bathing, beer and Chinese Takeaway. There's only so much cold and a bit stressed I can take before the slightest hint of not having to cook will be grasped with both hands. Damn the numbers for today; I'll cheat hard and be damned!
Posted by TOTKat at 19:22