After the surprise high kcal burn during yesterday's run through, my leg started to feel niggly last night and this morning it was definitely sore at the back, but so is the right one now, only less so. I'm hoping it's "just" DOMS and as such I've planned a gentle run tomorrow to kill half an hour while hubby is doing the The HELL of the Ashdown ride. Tell you what, finding a 5ish km running route around there that has any less than a total climb of about 100m is not easy! I've had to find a flattish bit with a loop I'll have to do twice and that'll give me a total climb of around 45m. Not quite the gentle run I was looking for, but given that Mr TOTKat will be cycling for 4 hours or so I've got to find -something- to keep me occupied while I wait.

Brekkie today was scrambled egg and egg whites on a toasted High Bran and Seed bagel, with Marmite. Lunch, mmmmlunch... one of my favourites, though it is quite low protein so I sneaked in some extra in a scoop of unflavoured whey powder - roasted, spiced butternut squash soup with a slice of unfruited malt loaf:- 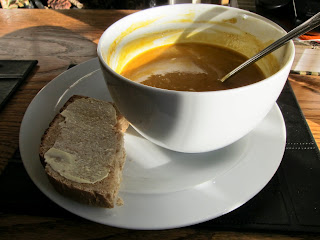 After fighting with the garden for all of about 20 minutes before deciding that it was way too cold and my fingers hurt too much from the cold (couldn't wear gloves to do weeding as it requires too much fine-grained finger control) we sat down for an afternoon snack of more of that heavenly banana and raisin malt loaf (with an apple on the side for me 'cause they're really nice and we have loads at the moment):- 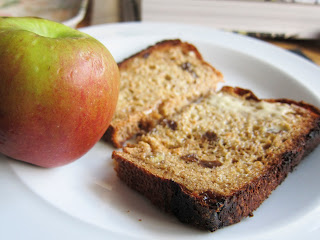 I've been wanting to try out Clearspring's buckwheat soba noodles for a while as they're a "healthier" alternative to the Amoy Straight to Wok ones we usually use; they're higher in fibre, have no added oil to keep them moist etc.; so it was a fabulous excuse for a (chicken) BEEP:- 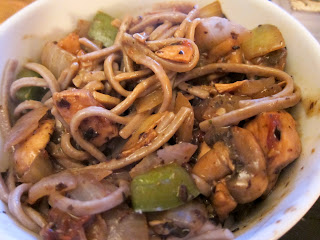