Michael is a sprinter. Michael is built like a small brick privy. Michael likes the idea that I want to lift heavy and be able to do pull ups. However, Michael seems to be a little hung up on lifting heavy will make me bulk up (which it won't unless I eat protein for England and take hormone supplements) and, as he's a runner, a little hung up on cardio too (but I've told him that I don't do treadmills as I get sea-sick afterwards). But still, he'll have a new routine for me for next Monday and we'll run through it together. He does get that I'm competitive, driven and don't really need/want someone standing over me for motivation. I think he might be a good replacement for the trainer I had before. We'll see next week.

We'll also see how I've done in the Virgin Active UK Challenge taster competition. The competition ends today, the draw for the bike happens next week and the results of who was fastest woman and fastest man will be announced. *fingers crossed* I was still in the lead on Monday this week! I don't really care about the prize, I just want to win a competition that involves physical prowess, dammit!

For brekkie, I decided to try coconut and chocolate with my yogurt and blueberries: 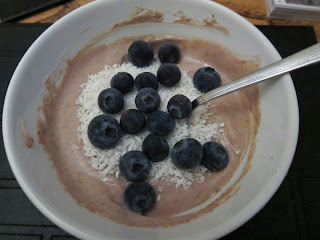 Not as tasty as I'd hoped, so I won't be doing that again.

And for dinner, a trusty beef chilli with shaved courgette, sliced onion and some toasted pine nuts sprinkled in: 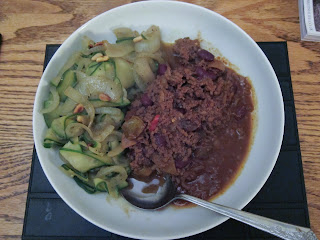