Brekkie was a slightly overcooked pile of scrambled egg+egg whites on a toasted bagel with Marmite. Nommy, but sub-optimal due to the eggs being ready too quickly. Bah. Then I slobbed about watching Saturday Kitchen (mmmfoodporn), followed by lunch. 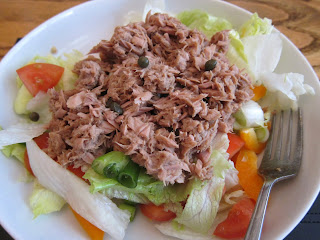 A Japanese-style dressing spiced up an otherwise quite boring tuna salad; lemon juice, soy sauce, balsamic vinegar and wasabi paste. Very very tasty on its own and a subtle change to the overall flavour of the tuna when mixed in with it. The tuna was lovely by itself. The salad was nice by itself. But, ew, they did not go together so well. I suspect it was the tomato that broke the flavours.

I was going to swim today, but changed my mind. I'm a tiny bit bored with swimming (better get my ass out of that attitude sharpish with only 12 weeks to the first triathlon!) so decided to do a little bit of intervals on the cross-trainer instead and some core work. The pleasant surprise was that 3x 60s planks weren't hellishly hard; side pulsed planks x60 were clean and almost "easy"; and I did 5 full press ups in between sets of planks without shuddering and grunting and thinking "I can't do these" after only the second press up of each set. :oD

I just want to play around with cooking food right now and taking pictures of it. To be honest, the idea of these triathlons is scaring me as I've not run in a while and cycled even less recently. I didn't want to do any ironing or vacuuming today either, but they needed doing. Bah. And, indeed, meh! Glad I pulled my finger out and did them, so. 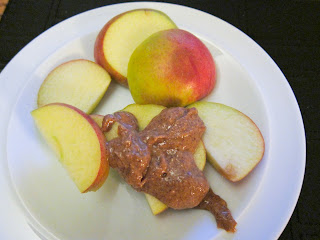 Gosh it's nice. The almond butter tastes more like cream with the sharpness of the apple (which was one of the nicest apples I've had in a long time, thank you Waitrose.) And, as well as being delicious, it fulfils "protein plus fruit or veg" :o)

Dinner was one of my favourites. We make a huge vat of beef chilli every now and then and freeze it down in portions. Occasionally, we make lasagne using the chilli instead of a beef bolognese and ohhhh is it tasty! 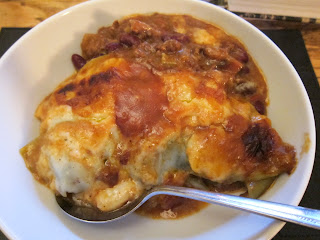