First run of the year

With not very many weeks to go to the first triathlon of the year, it was about time I hauled ass outside and did some running. So, suited up in semi-cold weather gear; long running tights, t-shirt, hoodie, hat and gloves, I headed out on a familiar just-over-5km route; thinking "this is going to be horrible". As I crested the first little hill (over the railway line), I looked at my HRM and it was flashing "180". That's BPM. And I tend to keep it 170-178 running, or rather I was doing when I was running at least once a week. I felt fine though. Odd. Hey ho. So I kept on trucking at the same pace and checking on my heart rate every km or so. I felt totally and completely fine and it was staying at or just above 180 all the way. Usually I feel a bit rough if it stays up there and if it stays over 182 for more than a couple of minutes I feel pretty sick. But not this time. Nope. Fine. Well, I'm not arguing, so. Pace was 9:14/mile, or speed of 10.45km/h which is slightly faster than I was doing in the 10K race last year. Yes, quite pleased indeed.

Lunch today - pea and ham soup (made with a tin of mushy peas and chopped ham :o)) with rye bread:- 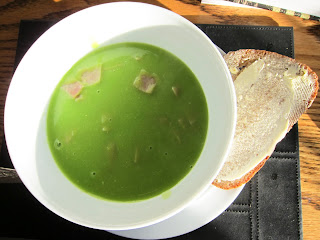 Snack - beef jerky and an apple ('cause they're so nice I can't resist them!):- 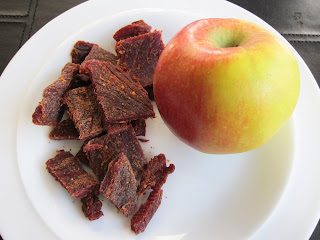 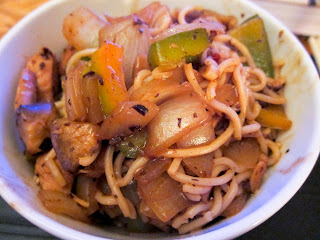