370kcals burned going through a 1 set run-through of it in 47 minutes today with lots of stopping and talking in between and no real cardio-based cool down (but including a warm up of 1km rowing at the start). So I'm quite impressed by that. Mike(?) is very enthusiastic, really encouraging (slightly OTT on that front) and very attentive to form. He's put together a really nice full body routine full of complex (as in multiple-muscle group) exercises and showed me some new toys in the gym that I previously pooh poohed (mostly the Powerplates and Kinesis jobbies). As we went through the routine he modified them to fit me better (most notably when I mentioned that my left arm and shoulder is significantly weaker and I end up compensating for it, so he broke out clean and press barbell into squat and press dumbbells on each side to help build up the left side a bit more to even things out a bit). I have to wait for him to write up the routine with the extra notes from today's session (mmm, new plank variation and its tricky!) and he'll email them to me in time for my Monday work out. I'll post the routine once I get it.

Today's real highlight is dinner. 250g Bison rump steaks. They look incredibly lean, if a little on the thin side, but if they're anything like that buffalo I pot roasted, then we're in for a real treat tonight! And I get to have my weekly wine treat which takes me to 5 units of alcohol this week. 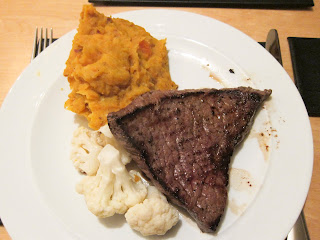 Only 1 cheat so far this week (the wine), but then there's the weekend which is a bit on the unplanned side at the moment, so plenty of scope for more cheating there!